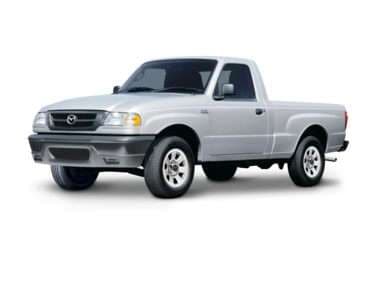 The Mazda B-Series is a two-door, three passenger compact pickup, and a four-door, up to five passenger compact pickup. The Mazda B-Series has been in production since 1961. The small pickup was a mainstay of the company lineup for many years, and even bore some of Mazda’s trademark touches such as a brief flirtation with a rotary engine. In the mid-1990’s, the company took their close relationship with Ford to the next level and transformed the B-Series into a re-badged version of the Ford Ranger. This enabled Mazda to benefit from Ford’s established compact truck platform, and also offer some of their small engine building expertise to the larger company.

The 2008 Mazda B-Series continues the tradition of similarity with the Ford Ranger. The platform this truck is built on is largely unchanged since the late 1990’s, although this is not necessarily a bad thing. The Ranger has consistently been one of the best-selling small trucks in North America, and the B-Series is able to benefit from this. In terms of physical resemblance, the two trucks are dead ringers and the parallels continue on under the skin.

There are two different engine options available in the B-Series. The B2300 is powered by a 2.3 liter 4-cylinder engine, which uses dual-overhead camshafts to help generate 143 horsepower and 154 lb-ft of torque. Buyers who are looking for more power for extra towing or utility can opt for the 4.0 liter V6 engine found in the B4000. This power plant makes a healthy 207 horsepower combined with 238 lb-ft of torque. Both engines can be had with either a 5-speed manual transmission or a 5-speed automatic, and while the B2300 is only available in 2-wheel drive, the B4000 comes with dual-range 4-wheel drive as standard equipment.

Unlike many pickup trucks on the market, the trim levels for the B-Series are fairly simple to navigate. The base B2300 is a regular cab pickup which can seat three across a split bench seat. 15-inch steel wheels are standard, but buyers can choose alloy rims to dress up the exterior. Anti-lock brakes and air conditioning also come as part of the normal equipment package. The B4000 comes in two different 4-door versions, with both employing half-size rear passenger doors to make entry to the rear easier. Inside, the cabin remains largely the same with the addition of power windows and door locks, but the truck does benefit from an upgraded suspension designed to help with off-road adventures, as well as a larger fuel tank. The B4000 Plus edition upgrades the interior with front buckets seats, cruise control and a leather wrapped steering while, while the outside of the vehicle gets chrome accents. The Plus also sees the installation of skid plates and a limited-slip differential.

The Mazda B-Series is a reasonably comfortable truck to drive, and the available V6 provides good power in its class. For those who are looking for an economical vehicle when it comes to gas consumption, however, the 4-cylinder engine is the clear winner with 21 miles per gallon in city driving and 26 miles per gallon on the highway. Overall, the B-Series is a solid option for anyone with a need for utility which can be met by a smaller than full-size pickup truck.

The 2009 B-Series comes in a regular cab mode, the B2300 Regular Cab, and the larger B4000 Cab Plus. The Mazda B2300 features a 2.3-liter, four-cylinder engine with 143 horsepower and 154 foot pounds of torque. The B4000 features a 4.0-liter, V6 engine with a single-overhead cam. The B4000 can produce 207 horsepower and 238 foot pounds of torque. Both of these models come with a five-speed manual transmission and both have a five-speed automatic transmission available as an option.

The B2300 trim level comes with 15-inch steel wheels, vinyl floor covering, a four-wire trailer harness, manual door locks, manual windows, cloth upholstery, a sliding rear window, an AM/FM stereo with two speakers, a front bench seat that features a 60/40 split and steel wheels with P225/70R15 tires standard. The B4000 trim levels comes upgraded with carpeting, air conditioning, a theft-deterrent system, floor mats, P235/75R15 tires and a raised 4WD suspension standard. There are very few options available for the B-Series. These include a bed extender, a rearview mirror with auto dimming and a pickup bed tonneau cover. The 2300 has an SE package available that includes a CD player, wheels made from alloy, cruise control, an auxiliary input jack, a CD player, a chrome grille and chrome bumpers. A bed liner and fog lights are also available options.