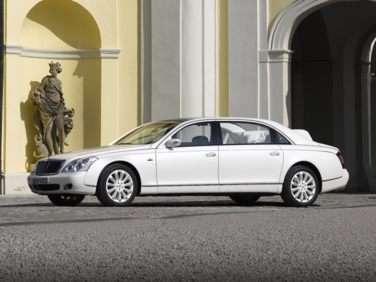 All About Maybach Landaulet

One of the most exclusive cars in the world, the Maybach Landaulet is the “open” version of the highly luxurious Maybach sedans marketed by Daimler-Benz in an effort to compete with Rolls-Royce and Bentley—or said more correctly BMW and Volkswagen, who own Rolls-Royce and Bentley. Because of this, Daimler-Benz, accustomed to being at the top of the heap of Germany’s auto industry with the Mercedes-Benz brand, suddenly found itself a Tier-2 player when its rivals acquired the world’s two top luxury brands.

In an effort to compete on more solid footing, the Daimler-Benz management team dusted off a nameplate it had owned since 1960—Maybach (pronounced MY-bock). Named for one of the company’s most legendary engineers, and an entrepreneur who started his own namesake auto brand, Wilhelm Maybach, along with his son Karl built some of the most luxurious cars in Germany between 1921 and 1929. Maybach also worked with Gottlieb Daimler and was instrumental in the development of the very first automobile.

The first of the modern-era Maybachs was shown at the Tokyo Motorshow in 1997. Two subsequently models went on sale in 2002, the Maybach 57 and the long-wheelbase Maybach 62. Priced in the $300,000 range, these ultra-luxurious automobiles featured cutting-edge technology for the time, and every possible power-operated device you could think of to fit into an automobile.  Power came from a 5.5-liter twin-turbocharged V12 producing some 540 horsepower. For the 2005 model year, the Maybach S models debuted with a significant power increase, 612 horsepower and 738 ft-lbs of torque from a twin-turbocharged V12 engine developed by the AMG division of Mercedes-Benz.

The Maybach Landaulet debuted at the 2007 Middle East International Auto Show as a concept car based on the long wheelbase Maybach 62 S The production car went on sale in 2009 with no discernable changes from the concept. The front seats of the Maybach Landaulet are fully enclosed, while the rear seats, presumably occupied by the car’s chauffeur-driven owner and a companion, are treated to a sliding soft roof, enabling the passenger compartment to open to the elements. A power-actuated divider window with adjustable opacity divides the owner’s compartment from the driver.

Unfortunately, the brand was hampered by the fact the Maybach brand (let alone the man) was largely forgotten by the cusp of the 21st century. Further, the styling of the Maybach cars simply didn’t stand up when parked alongside the offerings from Rolls and Bentley. Essentially, the Maybach models lacked presence. (Nice for those looking to roll large on the down-low, but people shopping in this category? Yeah, they usually ain’t tripping like that) Daimler –Benz announced the shuttering of Maybach at the end of the 2013 model year.