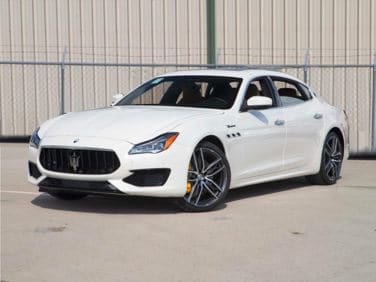 All About Maserati Quattroporte

If Ferrari were to ever build built a four-door luxury sedan, this is the form it would take. Shapely, stylish, comprehensively equipped, and exceptionally fast, the Maserati Quattroporte was originally introduced in 1963. After being absent from the U.S. marketplace for ten years, Maserati started shipping us the luxury saloon again in 2005.

As you may have surmised, Quattroporte is the Italian word for four doors. However, with the Maserati trident on its grille you expect superior performance and the Quattroporte has been equipped to live up to those expectations throughout its lifetime. For 2014, the car was redesigned a bit in an effort to make it more competitive with its rivals from Audi, BMW, Porsche, and Mercedes-Benz. The 2014 Maserati Quattroporte features a longer wheelbase and a more powerful V8 engine—along with a new V6 offering. The new V8 is a twin-turbocharged 3.8-liter unit delivering 530 horsepower and 524 ft-lbs of torque. The V6 is also twin turbocharged and delivers 404 horsepower and 406 ft-lbs of torque.

These engines replace the previous 425 horsepower, 4.7-liter V8, which made 361 ft-lbs of torque; and the 400-horsepower 4.2-liter V8 delivering 339 ft-lbs of torque. Both of those engine choices came a six-speed automatic transmission with paddle shifters mounted on the steering wheel for manual operation. The new engines are paired with an eight-speed automatic.

When the Maserati Quattroporte was reintroduced here in 2005, it was offered with a 395-horsepower version of the 4.2-liter, paired with an automated manual transmission dubbed DuoSelect by Maserati’s marketing team. While the transmission was a delight in high performance situations, for day to day cruising its lack of smoothness was quite off-putting for a luxurious car. Thus Maserati brought in the six-speed automatic and offered it alongside the DuoSelect for model year 2007—before killing DuoSelect altogether for the 2008 model year. If you’re looking to buy a used Quattroporte, you might want to avoid DuoSelect-equipped cars.

In addition to the reams of supple leather and cords of glowing wood trim, the Maserati luxury sedan is equipped with all of the modern conveniences; including surround audio, multi-zone climate control, touch screen navigation and infotainment, and a heart wrenchingly beautiful interior design. Four states of trim, Quattroporte S, Quattroporte S Q4 (all-wheel drive), Quattroporte GTS (with all of the go-faster, performance kit), and Quattroporte Diesel, were offered for the 2013 model year.

And while the new 2014 model is said to be somewhat less opulent and individualistic as the versions of the car offered before it, presumably the all-new 2014 model will eventually get around to ticking all of those boxes as well.