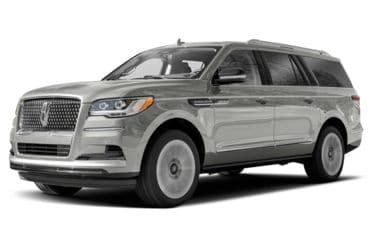 All About Lincoln Navigator

The Lincoln Navigator is a four-door full-size luxury SUV that seats up eight passengers. The Lincoln Navigator is manufactured in Wayne, Mich. alongside the Ford Expedition. Main competition to the Navigator include the Cadillac Escalade, Lexus LX and GMC Yukon Denali. The Lincoln Navigator entered the market in 1998 and was the first full-size domestic luxury sport utility vehicle - helping to define and refine the SUV to what it has become today. The early models were clunky and underpowered with it's 5.4 L V8 engine producing 230 hp engine. The power was increased by 70 hp in 1999. There were several other changes made in these early years but by 2003 the vehicle was redesigned. Some of the changes at this time included changes to teh frame and rear suspension, addition of larger brakes and better sound insulation.

In 2007, the vehicle went through another facelift. Improvements were made to upgrade the interior, adding cleaner lines and a more luxurious feel. The exterior of the vehicle was upgraded with a new grille that added yet more chrome.

For the 2008 year, the Lincoln Navigator is only offered with one trim level and most of the previous optional equipment has become standard. This includes things like heated and cooled front seats, power-folding third-row seats and a surround sound audio system. The Lincoln Navigator is big and bold and very recognizable. There are two large chrome grilles adorning the front end and a huge Lincoln cross logo. The standard for the vehicle is 18-inch wheels.

The Lincoln Navigator offers a comfortable spacious row with three rows of seating and a huge selection of luxury features. There are two trims available - Luxury and Ultimate. Under the hood of the Lincoln Navigator is a 5.4 L V8 engine producing 300 horsepower and 365 lb-ft of torque. There is no other choice of engine available. Paired with this is a six-speed automatic transmission with a wide gear that improves fuel economy and power. There is a choice of rear-wheel drive or four-wheel drive. The EPA fuel economy rating for the rear-wheel drive Navigator is 12 miles per gallon in the city and 18 mpg on the highway.

The interior of the Navigator has an easy to read instrument panel and a softer white lighting. The noise level is nice and quiet with the acoustic windshield and thicker glass. The trim is satin-nickel and Dark Ebony or grain-matched wood.

Standard features on the 2008 Lincoln Navigator includes a power liftgate, a power-folding third row of seating, parking sensors, adjustable pedals covered in leather, a power tilt and telescoping steering wheel, a built in console specifically for the second row of seating, and a rear-seat climate control system. There are also ten-way power front seats that have heating, cooling and memory systems build in. The entertainment system is a THX-certified 14-speaker audio system with six-CD changer, satellite radio and an auxiliary jack.

Options available include an Elite Package, which adds in a rearview camera, rear-seat entertainment system, and DVD navigation. There is and a Monochrome Limited Edition Package which removes some of the exterior chrome trim and adds in other trim to the interior. Individual options include a towing package and a moonroof.

For safety features, the 2008 Lincoln Navigator, as expected, comes fully packed. Included is the AdvanceTrac stability control system with roll stability control and front side airbags, Safety Canopy side airbags for three rows of seating, as well as new knee bolsters for the front driver and passenger.

The National Highway Traffic Safety Administration gave the 2008 Lincoln Navigator a five star rating for its ability to protect the front occupants in a head-on collision. The 2009 Lincoln Navigator has a number of new standard features as well as new exterior paint color choices. The new paint colors for all models include Sangria Clear coat Metallic, Monterey Grey Clear coat Metallic and White Platinum Tri-Coat. On the new Monochrome Limited Edition models, the options package comes with new bodywork trim colors in silver, black, white and green. New features to the Navigator includes parking proximity sensors, second row seats that are heated, a power lift gate, rain-sensing wipers, front seats that are heated and cooled, and a rearview camera that has a screen incorporated into the rearview mirror.

Another new feature is Ford’s Sync system for voice-activated communications and entertainment systems. The new audio system is a THX II audio system with surround sound. The engine in the 2009 Navigator produces an extra 10 horsepower over previous years. There is also a new flex-fuel capability in 2009.

The 2009 Navigator has just one trim level available. It comes standard with 18-inch wheels made of alloy, leather upholstery, a powered steering wheel that tilts and telescopes, a console in the second row that has its own climate controls, antilock disc brakes that feature brake assist, stability control, adjustable pedals, parking sensors, memory settings for the driver’s seat, satellite radio, second row seats that are heated, third-row seats that have power folding, an auxiliary input jack, power front seats that are heated and cooled, a six-CD changer and an audio system with surround sound and 14 speakers.

The single trim level has a 5.4 liter, V8 engine that has 310 horsepower and produces 365 foot pounds of torque. The standard transmission is a six-speed automatic system. The vehicle comes in both four-wheel drive and two-wheel drive models. With rear-wheel drive and the proper equipment, it can tow as much as 9,000 pounds.