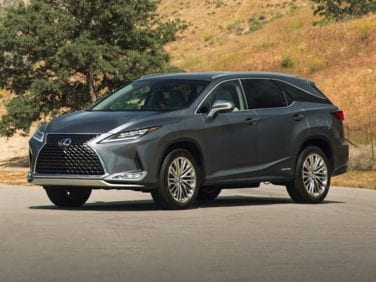 The Lexus RX is a sport utility vehicle that the Japanese auto manufacturer introduced in 1997. In Japan, the vehicle was originally called the Toyota Harrier, but when the vehicle was exported, it was put under the Lexus brand, and the RX was added to stand for “radiant crossover.” The five-door Lexus RX slotted into the compact sport utility vehicle class until 2003, when the classification changed and the vehicle began to compete in the mid-size SUV class.

The Lexus RX has been the best-selling luxury SUV in the United States since it was introduced. It was one of the first luxury crossovers to market, so the Lexus RX helped shape what is now a very competitive class. The Lexus RX features a front-engine configuration, and is available in either front-wheel-drive or four-wheel-drive. The Lexus RX was originally released as a gasoline powered vehicle, and several powertrain options have been available throughout the years. When the Lexus RX Hybrid was introduced, it quickly became the top-selling Lexus hybrid vehicle. The hybrid Lexus RX has been built at the Lexus Kokura assembly plant in Kitakyushu, Fukuoka, Japan since 2009.

The possibility of a Lexus RX Hybrid was speculated before the car was officially revealed. Lexus used a hybrid concept vehicle, the LF-Xh, to showcase the new design elements of the third generation RX before its debut. The LF-Xh concept, which featured a hybrid drivetrain consisting of a V6 gasoline engine and electric motor, LED taillights and headlights, and a revised interior, was shown at the Tokyo Motor Show in 2007, and the third generation of the Lexus RX went on sale as a 2008 model year vehicle. The first Lexus RX 450h was introduced in 2009, in the second year of the third generation RX, as a 2010 model year vehicle. It went on sale in the United States in late 2009, and was also released in Europe, Japan, and the rest of Asia that year. The Lexus RX 450h featured a gasoline engine from the non-hybrid Lexus RX 350, a 3.5-liter V6, that was paired to a set of electric motors totaling 16 kW. The Lexus Hybrid Drive system uses up to three hybrid motors; one for each of the front wheels, and all-wheel-drive models get a third motor for the rear wheels. The total output of the Lexus RX 450h drivetrain is calculated at 297 horsepower. The Lexus RX 450h also features an exhaust heat recovery system that helps improve engine start and stop times by reducing the amount of time it takes the engine to warm up. A cooled exhaust gas-recirculation system helps reduce fuel pumping loss. The electric motors are liquid cooled to optimize performance. Fuel economy for the first generation of the Lexus RX 450 was rated by the Environmental Protection Agency at 32 miles per gallon city, 28 miles per gallon highway for the front-wheel-drive version. The all-wheel-drive model loses just 2 miles per gallon city, and highway mileage remains the same. Drivers can monitor real-time fuel consumption thanks to an eco light indicator on the instrument panel.

The facelifted Lexus RX line, including the RX 450h, was designed in 2010 and premiered in 2012 at the Geneva Motor Show. The revised model got updated interior options, new wheels, new lighting, and a redesigned grille. The updated Lexus RX 450h, which featured a comprehensive airbag system, active headrests for injury prevention, stability control, adaptive front lighting and bi-xenon intelligent high beams, and a head-up display that projects crucial driver information on the windshield, went on sale in April of 2012.