DETROIT, MI - Realizing that affluent consumers might be interested in a luxury vehicle that employs a hybrid powertrain, Lexus launched the RX 400h at the 2004 North American International Auto Show. The 2005 Lexus RX 400h will share the same Hybrid Synergy Drive technology as the 2005 Toyota Highlander Hybrid and the new for '04 Toyota Prius but in a package slathered in leather and wood trim. We think that this is one of the most significant developments in the automotive industry, a litmus test that seems certain to produce positive results. Why? Think of luxury, and you reflect on effortless acceleration, a spacious cabin, a silky-smooth ride and a sumptuously appointed interior. Now think of the hybrid vehicles you've gotten to know in the past few years. Suffering a bit of cognitive dissonance over those images? We aren't surprised. Hybrid vehicles are usually compact sedans, with economy-minded interiors and agonizingly slow acceleration. For those with means, it takes a bit of a sacrifice to drive one of these vehicles on a daily basis, the logic being (at least until a flock of celebrities showed up at Hollywood's Kodak Theatre for the Academy Awards in a squadron of Toyota Priuses last year) that people who put their purses first and complain the loudest about fluctuations in fuel prices are most likely to buy hybrid vehicles.

Until now, carmakers hadn't considered that those who can afford to buy the nicer things in life might want to be environmentally correct, too. They don't need a gas-sipping car, but they like the idea of consuming fewer natural resources and emitting less effluvium into the atmosphere than your usual ground-pounding SUV without giving up space, comfort or power.

The 2005 Lexus RX 400h aims to change all that by becoming "the world's first luxury hybrid SUV." It is based upon the Lexus RX 330, which provides luxury, quality, space and comfort in spades. Practically every safety and comfort amenity is either standard or optional on the Lexus RX 330, making it a great foundation for a new kind of hybrid vehicle.Now add to that mix greater thrust, faster merging and less time spent at the gas station, and it's easy to see why the 270-horsepower 2005 Lexus RX 400h will garner attention and deplete bank accounts. Thanks to the electric motor that augments the standard RX 330's 3.3-liter V6, this hybrid powertrain makes 40 more horsepower than the standard setup. To recharge the electric motor's battery pack on the fly, the RX 400h uses a regenerative braking system to capture the energy created by braking, which normally gets wasted in the form of heat. All of this techno-wizardry results in an average fuel economy rating of 27.6 mpg while simultaneously accelerating to 60 mph in less than eight seconds. Not too shabby for a vehicle that will take you more than 600 miles on a single tank of gas and is rated a Super Ultra Low Emission Vehicle (SULEV). A continuously variable transmission (CVT) ships the power to the front or all four wheels.

The 2005 Lexus RX 400h will be furnished similar to the RX 330, with the buyer's choice of front- or all-wheel-drive. Passive and active safety equipment like stability control, side curtain airbags and knee airbags complement the top-rated crash safety scores. The RX 400h will also be the first Lexus to include Vehicle Dynamic Management (VDM), a new stability control system that can predict a slide or a skid. In such situations, VDM will remove the slack in the front seat belts and ready the panic assist brakes for maximum stopping effort. VDM also operates less intrusively than the existing Vehicle Stability Control (VSC) system.Inside, the cabin is richly trimmed with soft leather, polished wood and brushed aluminum accents. Options like a reverse camera, adaptive cruise control, a power rear liftgate and an air suspension system highlight the available goodies list. Outside, Lexus has made minor modifications to the RX 330's styling to differentiate the RX 400h. Lexus doesn't think the affluent hybrid buyer wants to announce in a loud voice that they are green, so this new model won't resemble a jacked-up Prius.

Equipped with the same Hybrid Synergy Drive system, the seven-passenger 2005 Toyota Highlander Hybrid will cost less than the Lexus while producing the same performance, but if your priority is to be pampered, the Lexus makes a fine palanquin. Luxury combined with environmental responsibility? Thanks to Lexus, now you can have it all. 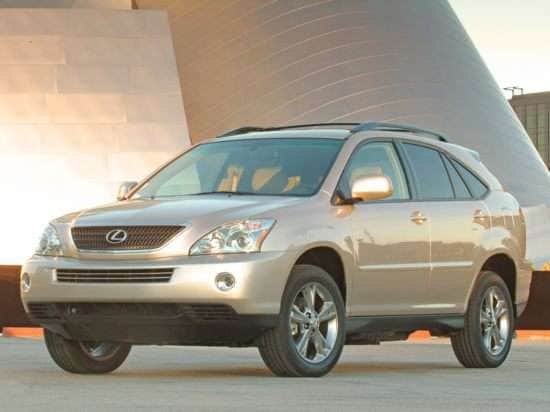