Lets's consider something for a moment. The Lexus RX lineup is the best selling luxury crossover for many years in the U.S., with almost 100,000 models being sold every year. Quite the achievement to say in the least.

The RX got some updates to the exterior in the 2013 model year with updated front clip that features new headlights with LEDs around the outer edge and the spindle grille making an appearance. Otherwise, the RX still has the basic shape that its worn since it was introduced back in the late nineties. There is a F-Sport package which adds a mesh grille insert, nineteen-inch wheels in a grey finish, and other sporty touches. Inside hasn't changed much for the 2014 with the RX retaining the same dashboard and layout. Some people may not like the position of the gear lever which gets in the way of certain controls when the vehicle is in park. Comfort is tops in the front with driver and passenger getting a number of adjustments. Back seats get the shaft though as head and legroom is tight.

In the case of the RX 350, it comes with a 3.5L V6 engine with 270 horsepower and 248 pound-feet of torque. This is paired to a six-speed automatic with the choice other either front or all-wheel drive. If you order the F-Sport package, the six-speed changes into an eight. Why Lexus doesn't offer the eight-speed in the standard RX 350 is one question that we cannot answer. On the fuel economy front, the EPA rates the 2014 RX 350 at: 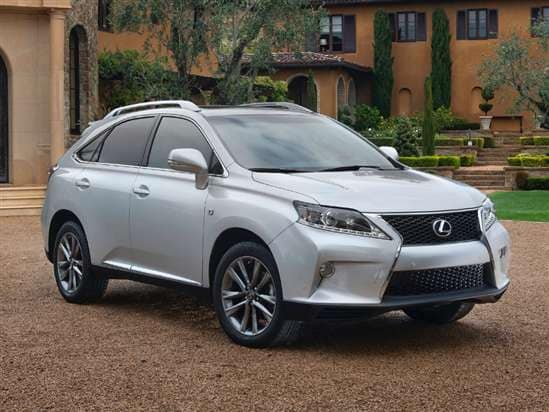