The Lexus RX 400 Hybrid is a serious luxury crossover SUV that was launched in 2007 and built upon the foundations of the RX 300, one of the earliest crossovers on the market. For fuel economy and environmental consciousness it is hard to go past the RX 400 hybrid for its 24mpg average, however if it is sporty handling you are after, you may be better served by the BMW X5 or the Acura MDX. Either way, the Lexus RX 400 hybrid ticks all the boxes of a super-comfortable family crossover that oozes sophistication and style.

The Lexus RX 400 Hybrid is a carryover from last year, sporting the Toyota hybrid system powered by both battery powered electric motors and 3.3-liter V6 gasoline engine. Together they produce 268hp and use continuously variable automatic transmission. Like other hybrid vehicles, the RX 400 Hybrid generates electricity through regenerative braking and low-speed cruising, charging the battery which stores power for use during low-speed driving. In fact, driven slowly and without excessive acceleration, the RX 400 can achieve significantly better fuel economy than the quoted 27/24mpg city/highway for the 2WD and 26/24mpg for the AWD (yes, the city fuel economy is better than the highway mileage).

The Lexus hybrid accelerates as well as its RX 350 cousin and as with other hybrids, the most difficult thing about driving them is getting used to the silence. It is unnerving at first to not have the engine chugging along in the background, but once you get used to it, the driving experience is very little different.

Handling is excellent on the RX 400 Hybrid, and as long as you keep in mind that this is not a sports performance vehicle, drivers are bound to be impressed by the firm but absorbent suspension that comes from gas shock absorbers and fully independent coil sprung suspension with rear stabilizer bar. It is not a vehicle for throwing around corners, but steering is responsive and the overall effect is surprisingly car-like. There is a choice between front-wheel drive and all-wheel drive and 18-inch alloy wheels are standard.

The 2009 Lexus RX 400 Hybrid varies only slightly from the highly praised RX 350 with its luxury interior. The rear seat has been raised to fit the battery system underneath them to leave the maximum cargo space - generous at 87 cubic feet.

Five passengers are seated comfortably in the Lexus RX 400, and although there are some who criticize the RX for not providing a third row of seating, there is no doubt it would compromise the Lexus comfort and quality standard. As it is, the seats are luxuriously comfortable with optional leather coverings and 10-way power adjusted front seats with driver memory settings. The interior is all that you would expect from Lexus, offering sliding and reclining second row seats, auto-dimming mirrors, wood trim, dual-zone climate control and steering wheel controls for the 8-speaker sound system. The navigation system includes controls for the audio and climate system and also displays the energy status (ie electricity or gasoline) and fuel-economy. The power rear door is operated by a button on the key, or inside the cabin.

Lexus prides itself on its safety record and is rewarded with a full five stars in government crash testing for both driver and passenger frontal protection and side impact situations. Vehicle Stability Control is standard with the Anti-locking brakes and Brake Assist to detect situations where the vehicle is in danger of losing control and adjusting power and braking automatically to maintain control. The full range of airbags is available including front, side, and knee bags.

Overall the 2009 Lexus RX 400 Hybrid is a serious crossover SUV that combines not only great fuel economy, but class-leading performance, responsive handling, luxury-level comfort and features, and the ability to wear your environmental conscience on your sleeve (or more like on your car). As one of only two hybrid SUVs on the market (alongside the Cadillac Escalade), Lexus has carved out a niche for themselves that is sure to benefit them in these times, even if the buying price is $4000 more than a regular RX 350. 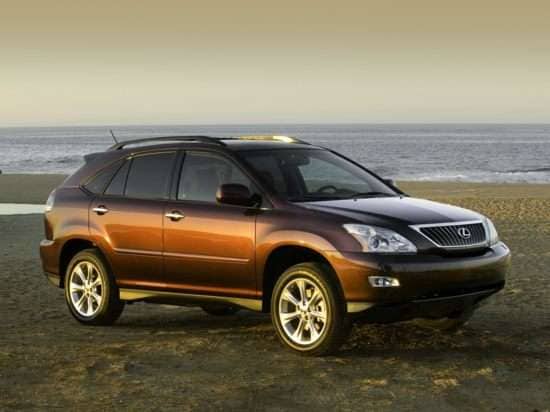