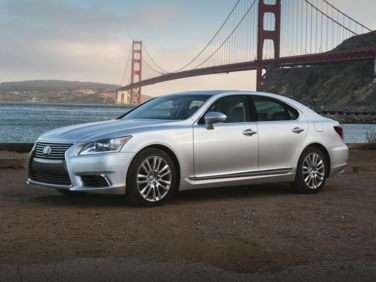 The Lexus LS 460 is a four-door, five passenger luxury sedan. The Lexus LS is the venerable flagship of the Japanese luxury automaker. On sale since 1989, the LS has regularly been featured at the top of its class in terms of both reliability and luxury features. The large sedan has seen huge investment from parent company Toyota in terms of research and development, all with the goal of producing the best luxury vehicle on the market. The LS caught its European competitors flat-footed in the 1990’s, and Mercedes-Benz later admitted that it had been forced to lower the pricing of its own top of the line S-Class in order to stay competitive with Lexus.

Many years have since passed, and the 2009 Lexus LS is still as impressive as ever. The vehicle’s bold but not offensive styling sits it well amongst buyers turned off by some of the more radical luxury sedans to have made their way onto the market in the past 10 years. The LS manages to look modern yet at the same time regal. There are three different versions of the LS available, with the first two, the LS 460 and LS 460 L using the same engine: a 4.6 liter V8 that generates 380 horsepower and 367 lb-ft of torque. Both are also shifted by the company’s exclusive 8-speed automatic transmission.

The third version of the Lexus LS is the LS 600h L, which uses the same extended platform as the 460 L but substitutes a hybrid drivetrain consisting of a 5.0 liter V8 and an electric motor that in combination produce 438 horsepower. Fuel mileage is 20 miles per gallon in the city and 22 on the highway – not quite as good as the standard LS while cruising but much better in stop and go traffic. The hybrid version of the sedan also uses all-wheel drive instead of the LS 460'S rear-wheel drive setup.

The interior of the Lexus LS is replete with an impressive number of gadgets and features. Heated and cooled leather front seats are standard on all versions of the LS, and beautiful but restrained leather accents can be found throughout the car. In the rear of the 460 L, heated reclining seats share an enormous amount of space with a cooler, an optional folding table and a DVD screen. Doors automatically close, as does the trunk in order to reduce the amount of effort necessary to get in and out of or load the vehicle. For the driver, the LS features brake-hold, which keeps the brake on at the touch of a button – mostly useful when on a hill - and a pre-collision system which tenses seatbelts if it detects a possible accident in the near future. Adaptive cruise control is also available to automatically keep the LS a safe distance from traffic on the road in front of it.

With so many luxury features, it would be easy to assume that the Lexus drives like a detached sofa, but the reality is that this ultra-comfortable machine runs so smooth it is tempting to think that it was not constructed but rather organically grown. Power is delivered effortlessly regardless of whether one is driving the hybrid or the standard V8, and the suspension is tuned to be responsive without introducing harshness. The car represents the ultimate in over the top luxury, and with the Lexus reputation for quality, drivers can be assured that they will get many thousands of miles out of this well-built full-size sedan.

The 2009 Lexus LS has had several changes since the 2008 model year. The LS 460 and the LS 460L have both had all-wheel-drive added to their list of options. All-wheel-drive LS models also get power-assisted steering with a variable ratio, air suspension, and a heated steering wheel with a wood rim. There is also a new memory function on the passenger-side seats on these models.

The Lexus LS 600h L is another LS model that has been updated in the new model year. The only change to this hybrid vehicle model is the new passenger-side seat memory that has been added. The LS 600h L has a 5.0-liter, V8 engine with 389 horsepower. It has an electric motor with 165 kilowatts and a pack of nickel batteries.

The base model LS comes with 18-inch wheels made from alloy, a sunroof, xenon headlights that are adaptive, wood trim, leather upholstery on the seats, automatic climate control with dual zones, keyless ignition, keyless entry, front seats that are heated, an auxiliary audio jack, front seats that have memory and power controls, a six-CD/MP3 changer and an audio system with 10 speakers.

There is an LS model, the LS 460 L, which comes with a longer wheelbase. It gives the vehicle an extra 4.8 inches in its midsection to give it more legroom. The 460 L model also comes with a navigation system based in a hard drive that features a rearview camera. In addition to the regular 460 features, it also has Bluetooth, front seat ventilation, a power rear sunshade, heated rear seats and real-time traffic reports. These standard features on the 460 L are available as options for the LS 460. Options for the 460 L include an upgrade package for the rear seat that ads additional wood trim, air-conditioning for dual zones, a cooler box, extra audio controls and power door sunshades.