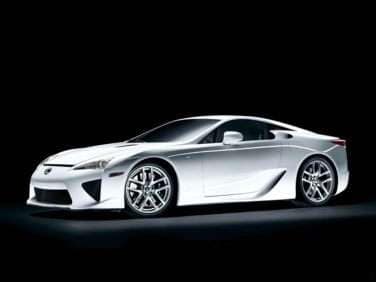 All About Lexus LFA

The Lexus LFA is a short-lived supercar from the Japanese automaker, produced only from December of 2010 until December of 2012. The LFA, a two-seat coupe, endured years of revisions and was shown several times around the auto show circuit in different concept forms. Though Lexus began working on the LFA nearly ten years before its debut, it wasn’t shown until the North American International Auto Show in Detroit in 2005. Another concept, a couple years later, was more detailed and finished, indicating that Lexus was taking the car more seriously as a candidate for production. A roadster version of the concept was revealed in Detroit at the 2008 North American International Auto Show, and the finished version finally premiered at the Tokyo Motor Show in the fall of 2009. The concept cars continued to make the rounds at the auto shows and received praise. However, production did not begin until more than a year later, and the car’s release was timed to coincide with the 20th anniversary of the Lexus brand. Though the Lexus LFA was praised for its low price (as compared to other supercars), won a handful of awards, appeared in several racing video games, and earned generally positive reviews from automotive critics and journalists, the model’s run wrapped up after a limited number of cars produced over just a couple of years.

When the Lexus LFA was launched, its sales were tightly controlled due to planned limited production. Potential buyers had to apply to purchase an LFA, and Lexus selected eligible recipients, who could then use an online configurator to design and personalize the car and select all of its options. Characteristics such as interior color, exterior color, brake caliper color, seats, and steering wheel color could all be chosen by the buyer. Each LFA was a custom order and was hand-built at a Toyota plant in Japan, and included a plaque with the car’s production number. Since the original North American allotment for the LFA was only 150 cars, Lexus took measures to prevent buyers from profiting by flipping the car. Buyers could only take delivery if they agreed to a two-year lease, though later on in the program, buyers had to agree to give their dealership the first right of refusal to buy the car back if they chose to sell it. These measures helped Lexus control the car’s market value, but they also helped create an air of mystery and increase desirability (even though, by then, the car’s entire production run had already been sold out).

The Lexus LFA featured a front-mounted 4.8-liter V10 engine that could achieve a reported top speed of 202 miles per hour. The powertain produced 552 horsepower and achieved a 0-60 time of 3.6 seconds, and was mated to a six-speed automatic sequential gearbox transmission. The LFA featured a digital tachometer because Lexus explained that the engine revved too quickly for the needle of a traditional analog tachometer to keep up. The frame of the Lexus LFA was a combination of carbon fiber-reinforced polymer and aluminum. Almost the entire body of the car was composed of these two materials for the benefits of strength and weight reduction. The LFA’s interior was designed to use leather and alcantara for surfaces that required a soft touch, and carbon fiber and metal elsewhere, all at the whims of the owner’s customization.