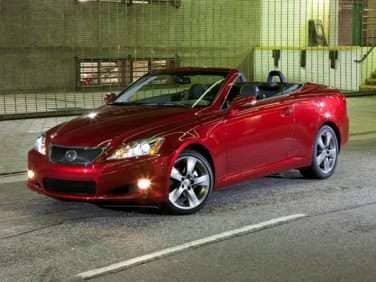 The Lexus IS is an entry level luxury car series offered by the Japanese auto manufacturer. Lexus introduced the IS series in 1998, intended to compete in the upscale compact car category. The Lexus IS series was actually sold in Japan as the Toyota Altezza, and is the vehicle that inspired the trend of “altezza-style” aftermarket taillamps. When the Lexus brand was introduced, the brand absorbed the Altezza lineup and the series entered its second generation in 2006. The Lexus IS series is assembled at Lexus and Toyota production facilities in Tahara, Aichi, and in Miyawaka, Fukuoka, in Japan. The Lexus IS series is designed to compete primarily with luxury and sport compact sedans from European auto manufacturers. The IS 250 is available around the globe, in markets including North America, New Zealand, Australia, Hong Kong, Singapore, Thailand, Taiwan, South Korea, South Africa, and Chile.

The Lexus IS 250C is a four passenger, hardtop convertible variant of the Lexus IS series, specifically the IS 250, that made its debut in October of 2008 at the Paris Motor Show. The IS lineup was treated to a refresh for that model year, and the suspension and steering components received upgrades to improve control, stability, and drivability. The Lexus IS 250C went on sale in North America and Europe in early 2009, alongside the Lexus IS 350C and a more limited version of the IS convertible, the IS 300C. Another refresh, in 2010, provided interior updates for the IS model lineup.