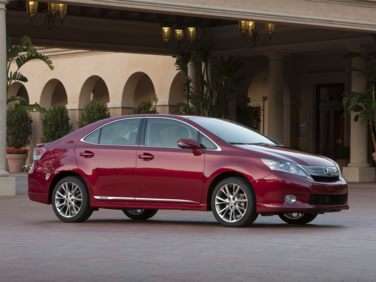 The Lexus HS 250h is a short-lived entry-level luxury compact four-door sedan that the Japanese auto manufacturer Lexus formally introduced in 2009 at the North American International Auto Show in Detroit, although it was previewed at the Detroit show a year before. It went on sale in Japan in July of 2009, and it reached the United States in August of 2009, as a 2010 model year vehicle. Unlike most of Lexus’ previous gasoline-electric hybrid vehicles, in which a hybrid drivetrain was fitted to an existing model to make a new version, the Lexus HS 250h was the first Lexus intended to be a dedicated hybrid, and was designed and engineered as a hybrid car from the ground up. The automaker has said that the HS name is an abbreviation for “Harmonious Sedan.” The Lexus HS 250h was assembled at a Lexus production facility in Miyawaka, Fukuoka, Japan, for domestic sales as well as North American export. United States sales of the HS 250h fell sharply near the end of 2011, and in spring of 2012, Lexus discontinued the HS 250h in the United States, to be replaced by a larger hybrid sedan, the ES 300h. The Lexus HS 250h is still available in Japan, where it has experienced successful sales figures.

The Lexus HS 250h is a front-engine, front-wheel-drive car, and is the first Lexus to have an inline-four gasoline engine. At its debut, it was also the most fuel efficient vehicle in the Lexus family. The gasoline engine component is a 2.4-liter four-cylinder that produces 147 horsepower. The electric motor is powered by a nickel-metal hydride battery that weighs 90 pounds and is located between the rear seats and the trunk. Combined with the electric motor, the total power output is 187 horsepower. The drivetrain is complemented by a continuously variable transmission. The Lexus HS 250h has a top speed of 112 miles per hour and can accelerate from 0 to 60 in 8.4 seconds. The platform was based on the third generation of the Toyota Avensis, and the drivetrain is similar to that found in the Toyota Camry Hybrid. Fuel economy, according to the Environmental Protection Agency, is 35 miles per gallon city and 34 miles per gallon highway. Fuel economy is aided by the Lexus Hybrid Drive exhaust heat recovery system that recycles heat to reduce engine warm-up times, therefore reducing excessive engine idling. This system was also used in the Lexus RX 450h hybrid SUV. For short distances and low speeds, such as city driving, drivers can operate the Lexus HS 250h in EV mode, which runs off the battery and uses no fuel. Eco mode uses both the gasoline engine and electric motor and determines the most efficient combination of power based on driving conditions. Power mode operates similarly, but provides the driver with a little more kick.

Japanese market Lexus HS 250hs encouraged drivers to drive more eco-consciously by way of an information system that gave real time driving feedback, and rewarded the most efficient drivers with charitable donations. The interior and cargo area of the Lexus HS 250h was designed with plant-derived bioplastic materials, further increasing the vehicle’s environmental friendliness factor, and Lexus said 85 percent of the car was fully recyclable. Despite the environmentally friendly design and engineering characteristics, the Lexus HS 250h is outfitted to compete with other compact luxury vehicles. It has a pop-up navigation and information console, a premium audio system, GPS navigation, and fully comprehensive safety systems such as intelligent high beam headlamps that automatically adjust to oncoming traffic to prevent dangerous glare, a lane assist system, a driver monitoring system that scans for obstacles, radar-based adaptive cruise control, and up to five safety cameras. The Lexus HS 250h got a facelift in early 2013, including a  grille based on new Lexus family styling cues, a slightly lower ride height, interior updates, and a new Sport Mode driving mode.