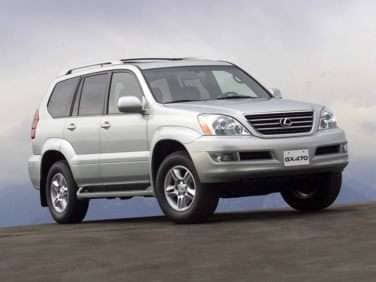 The Lexus GX is a four-door, up to eight passenger luxury sport-utility vehicle. When the competition to deploy the maximum number of sport-utility vehicles heated up in the early 2000’s, companies wanted to make sure that they had every segment of the market covered. For the luxury automakers, this meant that the lineups of their parent companies were raided for the appropriate platforms. Lexus turned to the Toyota 4Runner as inspiration for a mid-size SUV to slot between the RX crossover and the large LX. The resulting Lexus GX debuted in 2002.

The 2008 Lexus GX 470 has evolved incrementally in the years since it was first introduced. The sole engine option for this capable vehicle is a 263 horsepower, 4.7 V8 that also produces 323 lb-ft of torque. The GX 470 uses the same 4-wheel drive system as the 4Runner, and shifting duties are handled by a 5-speed automatic. The GX also utilizes a Torsen limited slip differential that can be locked for extreme off-roading, helping to establish the SUV’s credibility as more than just a luxurious highway cruiser.

Of course, being a Lexus, the GX 470 is no slouch in the comfort department either. Up to 8 passengers can be transported by this sport-utility vehicle, and with leather seats, walnut trim and optional third-row air conditioning, they will find themselves in quite a pleasant environment. As with most mid-size SUV’s, the third row of seating is more suited to children and very small adults, and even then, it is best to limit exposure to short trips. However, with the seat removed interior storage is excellent, trumping competitors from BMW and Mercedes. Buyers can also opt for a full-color backup camera, a voice-navigated DVD navigation system and something called Lexus Link, which provides the driver with services that range from 24 hour phone support to GPS positioning to emergency assistance.

With the GX 470’s trail credentials fully established, some might be worried that the Lexus is not as composed as some other luxury sport-utility vehicles when it comes to every day driving manners. The GX will never be confused with the GS or IS sedan when it comes to handling, but for a vehicle that is based on a truck platform it does acquit itself very well on highways and city streets. Lexus has done their best to ensure that driving characteristics are not encumbered by the heaviness of the chassis, and through using such technologies as driver-controlled adaptive suspension and variable-ratio steering the GX manages to turn in excellent performance in most situations. Fuel economy is under 20 miles per gallon on the freeway, but that is par for the course when dealing with a vehicle of this size. The upshot of the powerful, thirsty engine is an excellent towing capacity – 6,500 lbs.

The 2008 Lexus GX 470 is a good option for those looking for off-road toughness combined with asphalt-oriented luxury. The range of features and technologies wrapped up in the GX package do their best to straddle both worlds, and from the perspective of the driver and a passengers, do an admirable job.

The 2009 Lexus GX has had no changes made to it since the 2008 model year. The GX is a midsize SUV with all of the luxury that Lexus is known for. The GX has only one trim level- the GX 470. It is well-appointed with a number of luxury features as standard. The standard features include: heated outside mirrors, a sunroof, an adaptive variable suspension, 17-inch wheels made from alloy, running boards outfitted with lights, leather upholstery on the seats, automatic climate control with dual zones, a steering wheel with telescoping and power tilt, an auxiliary audio jack and power front seats that are heated. It also comes with a six-CD changer and a sound system with 11 speakers.

The Lexus GX comes with a 4.7 liter, V8 engine that has 262 horsepower and produces 323 foot pounds of torque. The only transmission available is a five-speed automatic. The transmission uses a dual-range transfer case to transfer power to each of the wheels. The GX can tow as much as 6,500 pounds with the right options.

The safety features available on the GX include side airbags in the front seat, antilock disc brakes, traction control, downhill assist control, stability control, hill-start assist control and side curtain airbags with roll-sensing technology that are in place for the first two rows. A rearview camera is an optional safety feature that comes with the optional navigation system. Another safety option for the GX is the Kinetic Dynamic Suspension System, which adjusts in regular driving conditions for less body roll or more off-road suspension travel. Other options for the GX include an entertainment system for the rear seats, Bluetooth, satellite radio, a third row seat with a 50/50 split, air-conditioning in the rear and a Mark Levinson system with surround sound and 14 speakers.