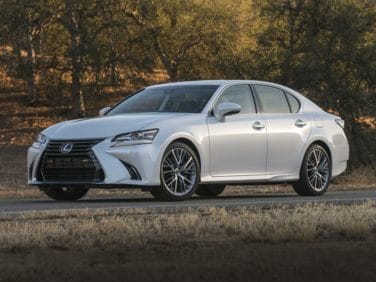 The Lexus GS 350 is a four-door, five passenger luxury sedan. The Lexus GS was the Toyota division’s first real attempt at creating a sporty luxury sedan. Rolling into showrooms in 1991, the GS, like so many Lexus sedans was based on a pre-existing Toyota platform that had been modified to reflect the brand’s luxury image. In the late 1990’s, the GS saw an increase in horsepower with the introduction of the V8-powered GS 400. The GS developed a reputation for comfort, performance and above all quality, as Lexus reflected the same attention to detail and robust construction that had become a hallmark of Toyota products.

The 2008 Lexus GS rides on a platform that was last upgraded in 2006. Features are sharper than the previous generation, but buyers will be familiar with the vehicle’s basic overall shape and dimensions. There are three different versions of the GS available to the public. The first is the GS 350, which is powered by a 3.5 liter V6 engine which generates 305 horsepower and 274 lb-ft of torque. This healthy mill is mated to a 6-speed automatic transmission that can be manually shifted by the driver should they desire an extra degree of control. The GS 350 can be had in either rear-wheel or all-wheel drive versions.

The GS 460 introduces a 4.6 liter V8 to the equation. With 342 horsepower and 392 lb-ft of torque, performance is improved over the V6 edition. The GS 460 accelerates to 60 miles per hour from a standing start in just 5.4 seconds, enjoying smooth shifts along the way from its 8-speed automatic transmission – the luxury segment’s first unit with this many forward gears.

For buyers who are interested in making an ecological statement with their luxury dollars, Lexus also offers the GS 430h hybrid. The 430h combines a number of different technologies to help reduce emissions and fuel consumption. By mating an electric motor to a 3.5 liter V6 engine, the GS 430h is able to produce 340 horsepower and knock off 0.2 seconds from the V8 powered GS’ acceleration time. Regenerative braking and a special transmission work to improve fuel economy to 22 miles per gallon in town and 25 miles per gallon on the highway – numbers that are significantly better than the sedan with the larger engine.

Of course, the GS 350 is more than just pretty body work wrapped around impressive powertrains. The interior of the vehicle is replete with luxury features, such as a Mark Levinson surround sound system, leather trim and seats, Bluetooth connectivity and driver’s aids such as a backup camera, parking assist and voice-activated navigation.

Despite the lack of an optional manual transmission, the Lexus GS 350 evolved to the point where it presents a serious challenge to models from BMW and Mercedes when it comes to luxury sport sedan supremacy. Given the level of refinement displayed by the Lexus, especially the impressive hybrid version, the GS deserves a test drive from anyone who is in the market for a high-performance, comfortable vehicle.

The 2009 Lexus GS continues without any changes from its 2008 models. The base model GS 350 is a luxury midsize sedan with a 3.5-liter, V6 engine with 303 horsepower and 274 foot pounds of torque. The GS has a six-speed automatic transmission as the only choice in transmissions. It has a manual shift mode for specific driving needs on certain terrains. The GS can accelerate from zero to 60 miles per hour in 5.7 seconds. There are both all-wheel drive models and rear-wheel drive models available.

The GS comes standard with many of the luxury features that Lexus vehicles are known for. The standard features on the GS include: xenon headlights, leather upholstery, 17-inch wheels made from alloy, automatic climate control with dual zones, an auxiliary jack for audio, a sunroof, keyless entry, keyless ignition, power front seats with 10-way adjustment controls, a cassette player and an audio system with 10 speakers and a six-CD changer.

The GS also has a number of safety features standard. These include stability control, antilock brakes with a brake assist feature, side airbags for the front and the rear seats, traction control, side curtain airbags that are full length and knee airbags for the driver and the front passenger. There are several GS versions available, including the GS 350, the GS 450, the GS 450h and the GS 460. The 450 model has a 4.6-liter, V8 engine with 341 horsepower. The 450h is a hybrid with a 3.6-liter, V6 engine and 292 horsepower. The GS 460 has a 4.6-liter, V8 engine and 342 horsepower.