The Lexus CT 200h is a four door five passenger luxury hybrid hatchback with aggressive styling and lush amenities.  The CT is powered by a forward thinking 1.8 Liter four cylinder gasoline engine with an electric motor to produce a maximum output of 134 HP, while maintaining a Super Ultra Low Emission Vehicle rating thanks in part to an electronically controlled Continuously Variable Transmission, which allows the CT hybrid to get an estimated 43 MPG around town and 40 MPG on the highway.

The Japanese luxury automaker offers the CT 200h in two trims: the $29,120 standard version and $31,250 for the Premium, which adds luxuries like a power tilt and slide moon roof with sliding sunshade and heated front seats, while a 10 speaker sound system with in-dash 6 disc CD changer and a hard disk drive navigation system with integrated back up camera and color LCD are only a few dollars more.

However, if the CT’s looks are a little too tame for your taste, Lexus offers an extensive F Sport package that is available with either synthetic NuLuxe or 100% genuine Leather.  No matter which option box you choose, the F Sport package transforms the CT 200h Premium into a sport tuned, leather trimmed racer with enough emblems to let the world know, and it just so happens to be a hybrid. 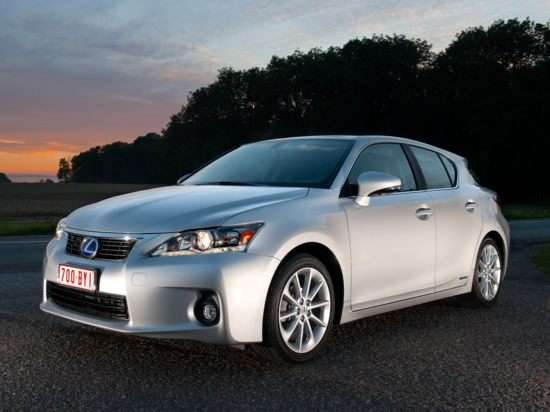