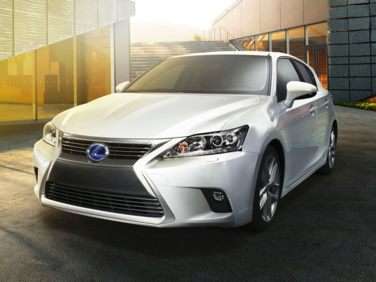 One of the two “sporty” Lexus hybrid models, the CT 200h combines athletic handling and a youthful appearance with a strong slate of contemporary electronic technologies for an altogether different take on luxury hybrid cars. Many have decried the CT 200h for its lack of a more powerful engine, but the fact remains it is one of the more interesting and most fuel-efficient of the luxury hybrid offerings.

Lexus introduced the CT 200h at the 2010 Geneva auto show. The car went on sale in the United States in March of 2011. At the time, it was the second model in the Lexus lineup to be purely hybrid. (The now-defunct Lexus HS 250h was the first.) It is also the only car in the Lexus lineup to use a hatchback body design. For those of you who just have to know what things mean, in the case of this Lexus, CT stands for Creative Touring, while the 200h refers to the fact the hybrid system delivers the performance of a 2.0-liter engine.

However, as a point of fact, a 1.8-liter four-cylinder gasoline engine in conjunction with a pair of electric motor/generators motivates the Lexus CT 200h. The combined system output of 134 horsepower is directed to the front wheels through a continuously variable transmission (CVT). If this sounds somewhat familiar, it’s because the same setup is employed by the Toyota Prius. However, while the CT 200h uses the Prius drivetrain, its platform is actually shared with the Corolla.

The EPA estimates fuel economy at 43 mpg city, 40 on the highway and 42 combined.

While the interior fit and finish are superb, and certainly quite attractive, a number of reviewers reviled the Lexus CT 200h as not being luxurious enough to be considered a Lexus at the time of its introduction. Still, this didn’t hurt sales, as the CT 200h has been quite well received in the marketplace—considerably better than the first purely hybrid Lexus model, the entirely Prius-based Lexus HS 250h.