The Land Rover Range Rover Evoque is an entry-level compact luxury SUV that can be had in both two-door and four-door body styles. The five-passenger Land Rover Range Rover Evoque is the least expensive model in the British sport-utility manufacturer's lineup and it is also the most fuel efficient thanks to the inclusion of a 2.0-liter EcoBoost four-cylinder engine. This turbocharged unit delivers 240 horses and 250 lb-ft of twist, and fuel economy checks in at a healthy 18-mpg city and 28-mpg highway. A six-speed automatic handles the gear shifting duties for the Range Rover Evoque and all-wheel drive is included free of charge.

The Land Rover Range Rover Evoque's base level is called Pure ($43,995 four-door / $44,995 coupe), and it features dual automatic climate control, a panoramic sunroof, Bluetooth connectivity, a touchscreen vehicle interface, a rearview camera and parking assistance. The Land Rover Terrain Response system is also standard, and it offers the ability to adjust the vehicle's all-wheel drive and throttle performance in order to more effectively deal with different conditions both on and off-road. The Range Rover Evoque Prestige (MSRP $52,395) is available exclusively with the four-door model and it adds high end leather upholstery, a leather-wrapped steering wheel and keyless entry. The Dynamic trim (MSRP $51,495 four-door / $52,895 coupe) displays a sportier rendition of the crossover's interior and exterior styling as well as the availability of an adaptive suspension system.

A number of options are also found on the Evoque's order sheet, including a parking system that offers a 360 degree video view of the area immediately around the vehicle, a navigation system, surround sound, HID headlights and a blind spot warning system. The Evoque coupe can be specified with a 2+2 seating arrangement, and heated seats and a heated steering wheel are available across the board. In terms of interior storage, the four to five passenger Land Rover Range Rover Evoque offers roughly 50 cubic feet of total cargo space. 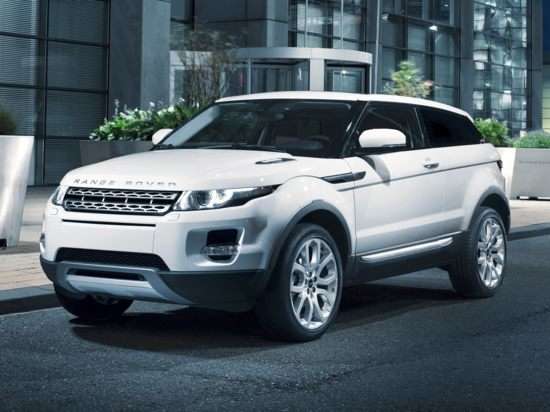