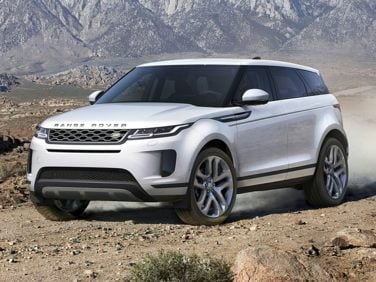 Based on the Land Rover LRX concept, first shown at the 2008 North American International Auto Show in Detroit, the Land Rove Range Rover Evoque offers all of the goodness the market has come to anticipate from a Range Rover model in a smaller more urban friendly package. Available in both two-door and four-door body styles, the Evoque was hailed for its rakish good looks, luxurious interior appointments, and its ability to tackle terrain in much the same fashion as its larger Range Rover siblings.

Power comes from a 2.0-liter, direct injected, turbocharged inline four-cylinder with what Land Rover calls Twin Variable Valve Timing. The highly efficient engine is also quite powerful for its size, delivering 240 horsepower at 5,500 rpm, along with 250 ft-lbs of torque between 1,750 and 4,000 rpm. A six-speed automatic is the sole transmission offering. While some, with no sense of history would decry installing a four-cylinder engine in a Range Rover heresy, fact is there has been a four-cylinder Land Rover product in the lineup before (albeit a diesel).

While a front-drive version of the Evoque is offered in other markets, every Range Rover Evoque making the trip stateside is equipped with all-wheel drive, as well as Land Rover’s Terrain Response System. In addition to the four-cylinder turbocharged engine, strategic employment of aluminum in the Evoque’s body saves weight to improve fuel economy. Speaking of which, the turbocharged Evoque’s fuel economy is quoted at 20 miles per gallon in the city and 28 on the highway.

Without question though, the Evoque’s primary calling card is its sleek styling. In fact, the Evoque telegraphed something of a design revolution at Land Rover, as elements of the Evoque’s design can be also found in the larger Range Rover and Range Rover Sport SUVs restyled for the 2013 and 2014 model years respectively. While the look certainly attracts attention the little Range Rover, it has also drawn criticism because the sloping exterior lines do compromise interior space. Although it’s fairly evident the Range Rover Evoque was intended to be more of a personal vehicle—typically occupied by two people or less—some feel it should offer more interior spaciousness simply because it wears the Range Rover nameplate.

Whether critical or not, once inside the Evoque, individuals will find the luxury quotient for which the Range Rover name is renowned is well in evidence. High quality materials artfully juxtapostioned and assembled with careful attention to quality make the interior of the Range Rover Evoque a particularly pleasant place.