There's something to be said for tradition, especially when discussing a brand as storied as Land Rover. The 2016 Land Rover LR4 is perhaps the closest link that the SUV-builder has to its past, at least from an engineering perspective, as there's still a ladder frame lurking underneath the upright body work that ties the LR4 to the most original of Land Rovers, the tough-as-nails Defender.

Still, the veneer of civilization that's been painstakingly applied to the people mover's surface goes more than just skin deep. It would be mistake to think that the Land Rover LR4's rugged character indicates that it's a brute when puttering around town - but it would be equally erroneous to assume that the family hauler hails from the same bloodline as its rivals from BMW (the X5), Mercedes-Benz (the GLE-Class), or Audi (the Q7). The LR4 occupies a niche in the luxury suv world claimed by few other full-size models, and as such it stands apart from the rest of the Euro premium pack.

It's a Big Box, with Class and Style

It's a Big Box, with Class and Style

You can draw line directly from the 2016 Land Rover LR4's right angles all the way through the Discovery of the '90s and 2000s to the Range Rover Classic of the 1970s and the previously-mentioned Defender that predated it. That's how consistent the LR4 (née Discovery) has been in the application of Land Rover's core styling cues.

I must admit to being a fan of box-like designs, which means I "get" the thrust of the LR4's aesthetics. In fact, I think that compared to the more homogenous SUVs penned by its German rivals, Land Rover has managed to remain distinctive in a segment seemingly obsessed with big bumper intakes, sloped rooflines, and a general desire to dispel any hint of "truck" from the showroom. This makes it hard to think of a comparator to the LR4 other than even more retro Mercedes-Benz G-Class and the GMC Yukon Denali, rectilinear reminders of the body-on-frame past. That the Land Rover is more domesticated interpretation of the G-Class/Denali template is useful in luring genteel family shoppers seeking a big-boned daily driver that's got gobs of presence without being imposing.

A pleasant side effect of the 2016 Land Rover LR4's generous silhouette is an equally plus-size cabin. It's not just that the LR4's passenger compartment is big, but it's also been punched out to feel as airy as possible thanks to enormous side glass front and rear, combined with available transparent roof panels that provide you with unfettered sightlines of the urban Serengeti that surrounds you on your inner-city safari. In addition, the first two positions are sufficiently regal, with well-perched captain's chairs providing a view of the road ahead that can only described as "commanding."

The LR4 also happens to provide the option of third row seating, joining the Range Rover Sport and Discovery Sport on the other side of the dealer lot as the trio of Land Rover SUVs that deliver seven-passenger capacity. Unlike its siblings, however, the LR4 delivers an all-ages experience in steerage, as once you get back there you enjoy far more comfortable surroundings than you might expect. Climbing in and out of the vehicle is made easier by way of its standard air suspension, which can kneel down and reduce ride height when parked. This also assists drivers in loading the Land Rover with cargo: there's 42 cubic feet behind the second set of accommodations, and with everything folded flat, the LR4's 90 cubes stand tall in its class.

Not So Light On Its Feet

Not So Light On Its Feet

There are definite trade-offs to the 2016 Land Rover LR4's hefty hull and heritage-heavy design, and they are most easily detected from behind the wheel. The LR4 exhibits what I would charitably describe as "traditional SUV dynamics," a catch-all term that describes the effect that weighing nearly 6,000 lbs will have on any attempt to round a corner at a high rate of speed. Body roll, understeer, and the occasional need to plan ahead when braking are all part and parcel of the LR4 experience, and while there's nothing frightening about how the vehicle comports itself on the road, it's definitely nowhere near as sporty as any other vehicle wearing the Land Rover badge.

There's also a certain honesty about the Land Rover LR4's modest handling limits that links hand-in-hand with its old school styling to further stand apart from options like the X5 and the Q7. Who really needs an SUV to corner like it's on rails, or at the very least, make a valiant attempt to impart some adrenaline when the road turns twisty? I know I don't - when I'm in sport-utility mode it's usually because I need to tow a trailer, haul around more than I can fit in my sedan (whether that be passengers or cargo), or drive somewhere that requires extra ground clearance and low-range four-wheel drive.

It's also reassuring to drive a truck like the LR4 that doesn't try to convince me it's ready to run a four-minute mile. The extra insulation that numbs the Land Rover's steering and suspension response (even with air shocks and an independent setup out back) accentuate the comfort-oriented nature of the vehicle and back it away from direct comparison to lither luxury fare.

There's but a single engine available when ordering the 2016 Land Rover LR4: a 3.0-liter, supercharged V-6. This unit has been pressed into service across much of the Land Rover and Jaguar family of vehicles, and its familiar 340 horsepower and 332 lb-ft of torque are taxed, but not overwhelmed by the LR4's bulk. In a straight line I was able to record a 0-60 time in the six-second range, and I found the eight-speed automatic transmission perfectly willing to downshift on demand and deliver the burst of acceleration required to handle highway passing. Fuel efficiency isn't all that impressive - Land Rover claims 15 mpg city and 19 mpg highway, numbers that will see you becoming a regular fixture at your neighborhood filling station. On the plus side, the LR4's sturdy construction makes it an excellent tow vehicle, boasting a maximum trailer capacity of just under 8,000 lbs.

Most of the 2016 Land Rover LR4's high tech equipment is essentially invisible, lurking in the drivetrain until it emerges, triumphant, to save your butt from having to be towed out of the mud. I'm talking, of course, about the LR4's outstanding four-wheel drive system, which comes in two distinct flavors. Standard with the SUV is a full-time automated system, but you can also add a low-range version of the same to the LR4 that promises extra torque amplification for handing truly sticky off-road situations. Regardless, all editions of the Land Rover feature Terrain Response, an electronic driver's aid that allows you to dial-in vehicle parameters such as throttle response, stability control intervention, and traction control in an effort to deal with specific challenges you might face while exploring.

I've had some fairly amazing experiences with Land Rover's four-wheel drive capabilities in the past, but my time behind the wheel of the LR4 was limited to dealing with blizzard conditions in Montreal, and the aftermath of said snow-dump. The SUV performed admirably in terms of tackling slippery streets and uncleared lanes, as long as I gave myself enough room to deal with the inevitable push associated with its bulk while taking tighter corners.

Land Rover's infotainment systems have long been sub-par, especially in terms of user experience. The 2016 Land Rover LR4 continues this trend, as it doesn't benefit from the latest InControl touchscreen interface gifted to more modern fare from the brand. As a result you'll be forced to deal with an unresponsive LCD screen, confusing menu structure, and a general lack of digital real estate when it comes to seeing all of the vehicle/radio/navigation data you'd want to keep a handle on while driving. It's not an unworkable system by any means, but it's a fair distance back from the experience you'd expect from a luxury model - especially compared to what's on offer by Audi (MMI) and BMW (iDrive).

I hinted at it earlier, but if there's one characteristic that comes across in almost every aspect of the 2016 Land Rover LR4 it's the sensation that you're piloting/riding in a vehicle that's been tuned to be plush above all other things. Sure, the LR4 is an exceptionally useful vehicle, with its acres of room, strong towing capacity, and go-anywhere four-wheel drive, but out on the road the SUV feels most like an oasis sheltering you from the noise and drama of the outside world.

It's a smart play from Land Rover that amplifies the LR4's strengths while papering over its weaknesses. Buyers content to hover down the road in their insulated sport-utility bubble are more likely to be drawn to the LR4's isolating chassis setup rather than turned off by its lack of razor-sharp reflexes. It's a question of knowing your market and not getting too distracted by what the other guys are doing, and with nearly 10,000 examples moved in 2015, Land Rover has to be happy with the performance of a vehicle that's nearing the end of its current design cycle.

Of course, if you're seeking out a luxurious three-row daily driver starting at $50,400 (and ranging up to $64,070), you've got a fairly long list from which to choose. Head-to-head, the GMC Yukon Denali feels like the closest approximation of the 2016 Land Rover LR4's playbook, although with more power and a slight premium to pay for a comparably-equipped model. The BMW X5 and the Mercedes-Benz GLE-Class each provide three rows of seating, still more available engine output, and of course vastly more nimble handling, but you'll start to encounter fairly severe sticker shock should you start to ascend the options sheet. The Audi Q7's price matches fairly well with the LR4, but again it's a vehicle with its roots in the sedan world and a platform to match. It's important to note that none of these vehicles is capable of providing the same level of off-road competence as the LR4, and with the exception of the Yukon Denali, none can match the Land Rover's cargo capacity. 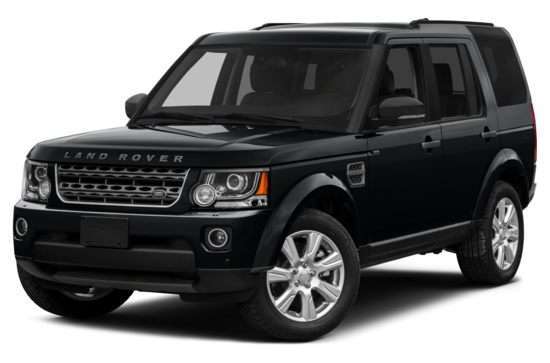