Successor to the Gallardo

Replacing the Gallardo would be a difficult task for Lamborghini as it was the best selling model for the brand. With 14,002 Gallardos sold during its ten-year life, it made up close to half of the total amount of vehicles built since 1963. Well, Lamborghini believes they have the successor and it is called the Huracán.

Let's dive into the Gallardo's successor and see what Lamborghini has in store.

A Little Bit Of Aventador, A Dash Of Reventón

A Little Bit Of Aventador, A Dash Of Reventón

The Huracán draws heavily from its bigger brother, the Aventador, and borrows some ideas from the limited production Reventón. Up front is the traditional wedge shape with massive air ducts and a set of LED headlights. The side profile mimics the Aventador with a number of air vents around the doors and a low roofline. The back is the most dramatic part of the Huracán with sharp edges and large tailpipes.

As for the name, we'll let Lamborghini explain it.

"Its successor, the new Huracán, has been developed from scratch down to the very last detail and, like the Gallardo and most other Lamborghini models, derives its name from the world of bullfighting. The fighting bull Huracán of the Spanish Conte de la Patilla breed was known for his outstanding courage and strong sense of attack. He fought in Alicante in August 1879, showing his unrelenting character and remaining defiant and invincible, thus entering into the legend of fighting bulls' history."

Stepping Into The Flight Cockpit

Stepping Into The Flight Cockpit

Situating yourself in the Huracán's interior, you feel like you're taking flight in a jet and not a sports car. The layout of the dashboard is low-slung with controls in easy reach of the driver and a push-button start that is hidden under a latch. Nappa leather and Alcantara are used for the seats and dashboard, while a reconfigurable 12.3-inch display serves as the instrument panel.

How Bout Some Power?

How Bout Some Power?

Now we should say we haven't mentioned the full name of the Lamborghini Huracán. Its official name is the Lamborghini Huracán LP 610-4. The LP 610-4 in Lamborghini speak means it produces 610 horsepower and has an all-wheel drive system. The 610 horsepower comes from a brand new 5.2L V10 engine which also happens to produce 413 pound-feet of torque. Getting all of that power to the four wheels is a new seven-speed dual-clutch transmission. Lamborghini says Huracán hits 62 mph in a 3.2 seconds, a top speed of 201 mph, and gets an average of 18.8 mpg for fuel economy.

Much like the Aventador, the Huracán will come with three different driving modes - Strada, Sport and Corsa - which alter the engine response, sound levels, power distribution and stability control. To help bring the vehicle to a stop, carbon-ceramic brakes come as standard. Options include variable-ratio steering and an adaptive suspension system.

Compared to the outgoing Gallardo, the Huracán weighs about nineteen pounds heavier (3,128 pounds for the Huracán, 3,109 for the Gallardo LP 560-4). This is due to a new aluminum and carbon fiber chassis.

The Lamborghini Huracán will officially debut at the Geneva Motor Show in March. 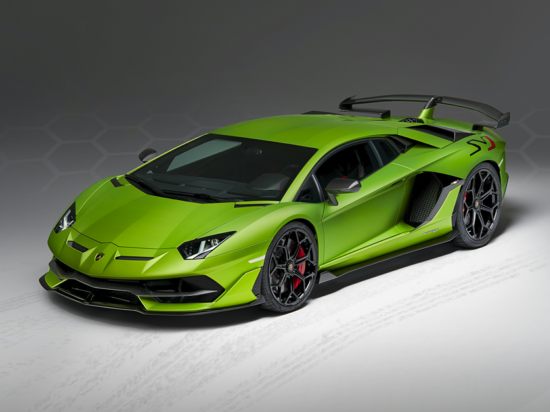