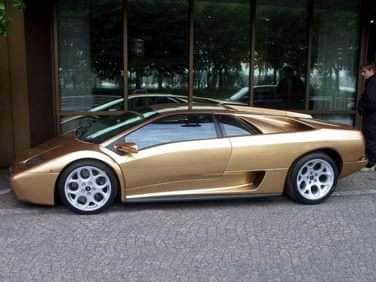 All About Lamborghini Diablo

The Diablo is a two-door sports car that was produced by the Italian auto manufacturer Lamborghini. Available as both a coupe and a roadster, the Diablo features a mid-engine layout and was sold in both rear-wheel-drive and all-wheel-drive configurations. The Lamborghini Diablo, which was a replacement for the Lamborghini Countach, was sold from 1990 until it was discontinued in 2001, and a total of 2884 Diablo cars were produced. The Lamborghini Murciélago replaced the outgoing Diablo.

The Diablo was the first Lamborghini production car to boast a top speed above 200 miles per hour. The car had two different drivetrains over its life, a 5.7-liter V12 and a 6-liter V12. Both engines were paired to a five-speed manual transmission. The 5.7-liter unit was used in the majority of the Diablo cars produced. It yielded power output of 492 horsepower and had a 0-62 acceleration time of 4.5 seconds and a top speed of 202 miles per hour. The Lamborghini Diablo came with a lot of standard features, at least in comparison to its predecessors. The cabin featured fully adjustable seats, electric windows, and an Alpine stereo system; the buyer could upgrade the audio to include a CD changer and a subwoofer. The driver got an adjustable steering wheel and could opt for a custom molded driver’s seat. Anti-lock brakes became available partway through the Diablo’s production run.

The Diablo VT was an all-wheel-drive version of the Diablo that was released in 1993. The VT in the model name stands for viscous traction, which came thanks to the Diablo VT’s viscous center differential. The configuration allowed up to 25 percent of the torque to go to the front wheels instead of the rear wheels, so the car suffered less from rear wheel slip than standard Diablos. The Diablo VT gained a reputation for having dramatically improved the car’s handling. The Diablo VT also had other improvements over the base Diablo, including better brake cooling courtesy of new front air vents, a redesigned and more comfortable interior, a redesigned dashboard, four-piston brake calipers, and power steering. These new features weren’t exclusive to the Diablo VT for long, though. Most of them appeared on the next model year of the base Diablo, which meant that the all-wheel-drive system was all that was left to differentiate the Diablo VT from the base Diablo.

During the course of the Lamborghini Diablo’s production, a lot of limited production special editions were released. These included the Diablo SE30, which was introduced in 1994 to mark Lamborghini’s 30th anniversary. It was more powerful and less heavy than the regular Diablo, owing to its objective to be, basically, a street legal race car. The engine yielded 523 horsepower thanks to engine tuning and exhaust upgrades. The Diablo SE30 also received extensive exterior changes and an exclusive metallic purple paint color. The Diablo SV was introduced a year later, and also received a horsepower boost over the original Diablo despite a lower base price. In 1995, the Diablo VT was given a carbon fiber convertible top and called the Diablo VT Roadster. Then, in 1999, Lamborghini gave the Diablo range a minor facelift, including an updated interior as well as some exterior revisions. The engine was given a power increase to 529 horsepower. Also that year, the Diablo SV SE35 special edition was released to commemorate Lamborghini’s 35th anniversary, but the SE35 was more limited than other special editions, and just nine cars were built.

The Diablo VT Roadster was phased out in 2000, which was marked by a special edition of 30 cars. This edition was identical to the regular production, except it was produced in two exclusive exterior finishes. The Diablo GT was released in a production run of 80 cars in 1999. Then, Audi’s takeover of Lamborghini altered the final years of the Diablo. By then, Lamborghini was already working on the Diablo’s replacement, the Murciélago. So though the 2000 Diablo VT 6.0 and VT 6.0 SE received significant aesthetic and engineering changes, it was already well understood that the investment in these improvements wouldn’t extend the Diablo’s production. The new 6-liter V12 engine yielded 575 horsepower and a lot of new features were introduced; however, the Diablo lineup was cut back so only the coupe body style was offered. In 2001, Lamborghini marked the end of the Diablo with a special edition of the Diablo VT 6.0, featuring exclusive exterior finish options and minor trim upgrades.