The Kia Sportage is a four door five passenger compact crossover that is available in up to seven trim configurations starting with the Base, LX, EX and SX as well as the all wheel drive LX, EX and top of the line SX.
The $18,500 Base Sportage is powered by a 2.4 Liter four cylinder that makes 176 HP and 168 lb-ft of torque being channeled through a six speed manual that is good for an estimated 22 MPG around town and as much as 32 MPG on the highway.  The Base Kia crossover also comes with an AM/FM/XM/CD/MP3 four speaker stereo with USB audio inputs and Bluetooth as well as flat woven cloth seats on the inside and 16 inch wheels and a chrome grill on the outside.
The Sportage LX is shifted via an automatic six speed sending power to a set of 17-inch rollers starting at $20,800 while all wheel drive brings the asking price up to $22,300.  The better-equipped Sportage EX gets Welding cloth seats standard and optional leather as well as navigation with Sirius Traffic and panoramic sunroof.  However the chrome door handles, rear spoiler and 18 inch wheels set the $23,900 crossover apart from lesser Sportages at a distance, the Premium UVO Powered by Microsoft Infotainment system is a big hint to anyone inside, with all wheel drive starting at $25,400.
The top of the line Kia Sportage SX is powered by a 2.0 Liter T-GDI turbocharged and direct injected four cylinder cranking out 260 HP and 269 lb-ft of torque to the tune of 22 MPG in the city and 29 MPG at speed.  The SX comes from the factory with leather, aluminum kick plates a glossy black and chrome grill as well as dual exhausts starting at $26,900 while the all wheel drive equivalent of the 2011 IIHS Top Safety Pick winner moves for $28,400.
A similar list of crossovers include the Honda CR-V, the Chevrolet Equinox and the Ford Escape.
Learn more about the 2012 Kia Sportage. 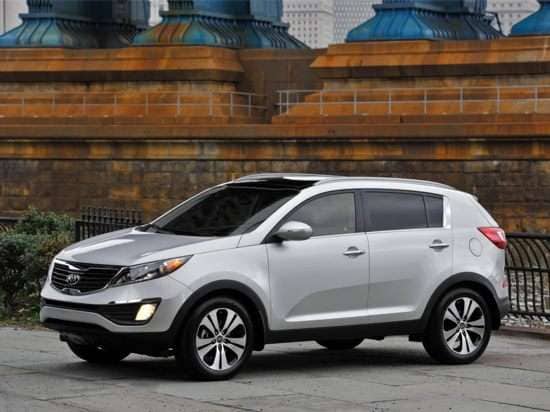