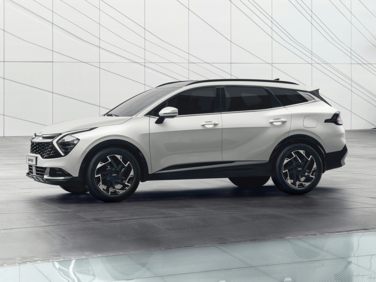 All About Kia Sportage

The Kia Sportage is a four-door front-wheel drive sport utility vehicle. The Kia Sportage first entered the market in mid 1990s as a compact SUV. It was one of the first of this class and struggled to compete as it was smaller than the competition and had some power issues. The base model first came with a 2.0 L single-overhead-cam four-cylinder engine that offered a very low 94 horsepower. The single cam engine was dropped in 1997 and was replaced by a twin-cam engine that offered 130 horsepower. The 4x4 Sportage model had a twin-cam 2.0 L four-cylinder that offered 139 hp. In 1998, a two-door convertible was added to the line. It came in both two-wheel drive and four-wheel drive. No other major changes were performed on the Kia Sportage and production stopped in 2002. In 2005, the current Kia Sportage was reintroduced with nothing in common with the earlier model.

The Kia Sportage has been well received with its smooth ride, roomy interior, and long list of standard features. Under the hood, you’ll find one of two engines. There is a 2.0 L four-cylinder engine offering 140 horsepower and the LX has a 2.7 L V6 engine that offers 173 horsepower. There are also two choices of transmissions available - the five-speed manual gearbox or a four-speed automatic transmission. The V6 engine can only be matched with the four-speed automatic transmission.

The EPA fuel economy rating for the current Kia Sportage is 20 miles per gallon in the city and 25 mpg on the highway.

The interior of the Sportage has a roomy interior for five adults. The rear seats drop down and folds flat creating a much larger cargo floor area at 67 cubic feet. The front passenger seat also folds down flat so that long loads can be carried. Both front seats have recline features. Other interior features that make traveling easier are a lockable glove box, map and cup holders, and the rear-seat has a central armrest.

There is an optional Sport Package available on the LX trim configured with a V6. This gives the vehicle fog lamps, a black mesh grille, bodyside cladding, sport gauges, rear spoiler, leather-trimmed steering wheel and shifter knob as well as a six-speaker sound system.

In the government crash tests, the Kia Sportage received extremely high ratings. The vehicle rated five stars for the driver and passenger in frontal crash tests and five stars in the side impact crashe tests. The only weakness shows in the rollover resistance rating where the vehicle received a three star rating.

The 2009 Kia Sportage is a carryover from 2008. The 2009 Sportage is available in two trims, the LX and the EX. The base LX makes use of a 2.0 liter 4-cylinder engine that produces 140 horsepower and 136 lb-ft of torque. A 5-speed manual transmission is standard equipment, with the option of upgrading to a 4-speed automatic. Fuel mileage is rated at 20 miles per gallon around town and 25 miles per gallon on the highway. The LX can also be ordered with a 173 horsepower, 2.7 liter V6 engine that also cranks out 178 lb-ft of torque. This motor is the only option for the EX trim. A 4-speed automatic is the exclusive transmission choice, and fuel economy numbers come in at 17 miles per gallon in city driving and 23 miles per gallon on the highway. Four-wheel drive can be ordered for each edition of the 2009 Sportage.