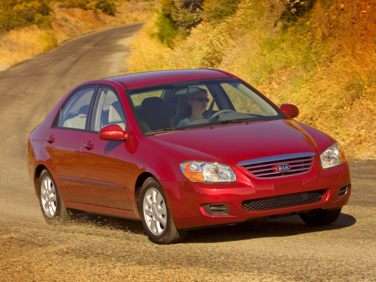 All About Kia Spectra

The Kia Spectra is a four-door front-wheel drive mid-size car. The Kia Spectra was first introduced to the American market in 2000. Back then, it was a four-door hatchback and it remained that way until the middle of the 2004, when it changed to the current model. At the time, Kia also offered a sedan called the Kia Sephia. However, as of 2002, the Sephia name was dropped and the sedan was called the Kia Spectra as well. Both models had the same 1.8 L four-cylinder engine offering 124 horsepower. At the beginning, the Spectra came in two trims, the GS and the GSX. For the sedan model when the name changed, it carried over the Sephia's base and LS names. The five-door Spectra5 hatchback model entered the market in 2005 and is only available in the single SX trim.

The Spectra entered 2008 relatively unchanged from last year's model. There is the four-door Spectra model and the five-door Kia Spectra5. The vehicle is available in the following trims – LX, EX and SX. Both the sedan and hatchback have a 2.0 L DOHC four-cylinder engine that is capable of producing 138 horsepower. There are two transmissions available - the five-speed manual transmission with overdrive is standard and there is an optional four-speed automatic.

The EPA fuel economy rating for the Spectra configured with the standard manual transmission has a rating for 23 miles per gallon in the city and 30 mpg on the highway.

The inside of the Spectra is loaded with space for passengers and cargo. The hatchback offers even more passenger space and cargo versatility. It has a 60/40 split back seat that folds forward and expands the cargo area by 52.8 cubic feet.

The Kia Spectra has a independent dual-link rear suspension with MacPherson strut front suspension to bring balance and comfort to this ride. There is also less noise than you’d expect when riding in the vehicle.

The Kia warranty is another plus for the Spectra as it has longer than average coverage. It covers a five year or 60,000 mile limited warranty that covers the vehicle from end to end. The powertrain warranty is for ten years or 100,000 miles. Roadside assistance is also available for the first five years.

The Kia does load the Spectra and Spectra5 models nicely. The base model has a six-way adjustable driver’s seat, a rear defroster, tilt steering column, as well as dual 12-volt power outlets. When you step up to the EX or SX models, there is a remote keyless entry, air conditioning and a full complement of power accessories, a six-speaker CD stereo.

When you reach for the top SX sedan along with the Spectra5 hatchback, there is a sportier look, a sport-tuned suspension, front strut-tower bar, and 16-inch alloy wheels. Also included are cloth seats to match the door panel inserts, a metallic finish on the trim, metal sport pedals and a leather wrapped steering wheel and shifter knob.

The 2009 Kia Spectra is a carryover from 2008. The 2009 Spectra can be had as either a sedan or a hatchback model known as the Spectra5. The sedan features three trims, LX, EX and SX, while the Spectra5 is sold exclusively as the 5SX. All editions of the Spectra make use of the same 2.0 liter, 4-cylinder engine that generates 138 horsepower and 136 lb-ft of torque. Buyers can choose between either a 5-speed manual transmission or a 4-speed automatic unit. Fuel economy for the 2009 Kia Spectra is rated at 23 miles per gallon in city driving and 30 miles per gallon on the highway.