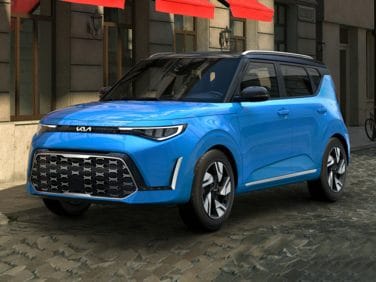 All About Kia Soul

The Kia Soul is a four-door, five-passenger compact five-door hatchback. The Soul will compete against other compact hatchbacks including the Scion xB, Honda Fit and the all-new Nissan Cube. As a replacement for the current Spectra5 five-door hatchback, Kia recently introduced its all-new, 2010 Soul at the 2008 Los Angeles Auto Show. With looks that evoke the same polarizing emotions as the Scion xB, Honda Fit and the recently introduced Nissan Cube, the new Kia Soul is sure to help Kia’s great start in 2009 get even better. If the 2010 Soul’s design doesn’t make this new car individual, its trim level designations definitely will. The Soul will be available in four trim levels when it goes on sale: Soul, Soul+, Soul! and Soul sport. The starting MSRP for the base-model Kia Soul is $13,995, while the top-of-the-line model, the Soul sport, will start at $17,645. In addition to the Borrego and upcoming Forte, the new Soul helps Kia expand its vehicle lineup from eight models up to 11, while injecting a new styling into its overall design language. Like the rest of Kia’s lineup, the Forte is covered by a five-year/60,000-mile basic warranty and a 10-year/100,000-mile powertrain warranty.

Breaking away from most of the conservative designs that Kia vehicles use, the 2010 Soul is in your face and you either love it or you hate it. From the very first glimpse, the Kia Soul takes a boxy design to new heights. Besides the bulged wheel openings, the most impressive design aspect it the upward sloping beltline and a side crease emanating from the fender vent that is, dare I say it, very Dodge Viper-esque. The Soul’s design looks like something of a crossbreed between a MINI Cooper and one of Scion’s hatchbacks. Blacked out A-, B- and C-pillars help give the all-new Soul personality and flair. Up front, Kia’s logo is prominently displayed above the grille opening. The lower grille opening is surrounded in matte, black plastic for a sportier look, while the rear fascia mimics this same design. The taillights sit tall for increased visibility and are inset with beveled edges for a more stylish affect. One thing that Kia will pride the 2010 Soul on is the myriad of colors available to car buyers.

Inside, the boxy five-door hatchback sports a roomy cabin with many surprising features included as standard equipment like six airbags, power windows and USB and auxiliary jacks. The instrument panel has a look that is unique without bordering offensive as is the case with Scion’s hatchback duo. Like the exterior, the Soul’s cabin will be highly customizable and carry over the color scheme on the instrument panel, driver’s airbag cover and seat backs. Acknowledging the youthful crowd the Soul is aimed at, Kia designed the interior to offer plenty of technology standard and ever more courtesy of option checklists. The 60/40 split rear seat folds down easily for increased cargo capacity. One aspect of the Soul’s design that may negatively affect cargo capabilities is the narrow rear liftgate.

Unlike most cars in its class, the Soul will offer two engine options to help reduce the overall price of the 2010 Soul’s starting MSRP. The base Soul will have a 122-horsepower, 1.6-liter inline-4 under the hood and a five-speed manual transmission pulling sole shifting duties. Higher trim levels will offer a bigger, more powerful engine, 142-horsepower 2.0-liter inline-4, and the choice of the manual or a four-speed automatic. Kia expects highway fuel economy on the 2010 Soul to be around 31 miles per gallon (for comparison, the Chevrolet Aveo5 gets 34 mpg highway and the Scion xB gets 28 mpg highway). The Soul will tackle American roads with MacPherson struts up front and a torsion beam axle out back. The Kia Soul Sport will offer a sport-tuned suspension.