The 2015 Kia Soul EV joins a growing list of battery-powered cars that are available outside the traditional haunts of California and other eco-friendly West Coast states. Having recently expanded sales of the Kia Soul EV to 12 states in total, the crossover wagon stands apart from rivals like the FIAT 500e (California-only) and the Chevrolet Spark EV (California and Oregon) not just in terms of where it is sold, but also with regards to practicality.

In fact, aside from the 50-state Volkswagen e-Golf, the Kia Soul EV is perhaps the most daily driver-friendly gasoline-to-electric conversion on the market. It helps that the Kia Soul platform was designed from the get-go to eventually accommodate an all-electric propulsion system, and that the Soul itself is already one of the best wagons in its class.

Still, making the decision to drive electric puts you in a position occupied by few others, regardless of where you might live. As I discovered during my time pent with the battery-powered Kia Soul, EVs face unique challenges and require subtle alterations to your behavior behind the wheel in order to get the most out of what the technology promises.

The Best Battery Range Outside Of Tesla

The Best Battery Range Outside Of Tesla

The 2015 Kia Soul EV has the best battery range of any electric vehicle on the market, outside of the purpose-built Tesla Model S. On a full charge, and with the gods of traffic, weather, and temperature all smiling down on you simultaneously, you'll see 93 miles of emissions free driving. This might seem paltry in the face of the 200-plus miles you get from the Model S, but it's important to note that there's an enormous price difference between these two vehicles: with a starting MSRP of $31,950, the Soul EV costs less than half what even the cheapest Tesla sedan asks for. The Soul EV's closest competitors are the much-smaller Nissan LEAF (84 miles) and the Volkswagen e-Golf (83 miles).

In regular driving there didn't seem to be much about the Kia's advertised range that didn’t ring true. I never drained the vehicle down to the very last electron - that's too frightening an endeavor to consider in my area, where chargers are few and far between - but especially when piloted on city streets the Soul EV did an excellent job of recapturing kinetic energy through its regenerative braking system, in some cases showing zero drop in total range on shorter trips of five miles or less. On the highway it was a different story: high speeds taxed the battery much more than I expected, and using the climate control system to either heat or cool the car exacted a penalty of roughly three miles as soon as you turned on the switch.

As for charging, I only had access to a standard household outlet (120-volts). This was by far the slowest way to do things, as Kia advertises 24 hours from empty to full (and possibly longer if you are using an extension cord like I was). I left it plugged in overnight and it was able to replenish 40 miles of charge in roughly 11 hours, which jives with Kia's estimates. Quicker juicing can be accomplished using a 240-volt connection (five hours to full) or a 480-volt quick charge station (just over half an hour to 80 percent). The Soul EV offers a pair of charge ports designed to accommodate the full spectrum of existing technologies, but they are both located underneath a pop-open panel on the front grille, which means you have to drive in to your charge spot rather than back in and use a more convenient side-port like you find on many other electric vehicles.

The 2015 Kia Soul EV's electric drivetrain has been tuned to provide 109 horsepower and 210 lb-ft of torque, numbers that are wedged both above and below the base gasoline model's 1.6-liter, four-cylinder base motor (130 horsepower, 118 lb-ft of torque) and its more robust 2.0-liter four-cylinder mill (164 horses, 151 lb-ft of twist). You'll notice that the Soul EV blows away all other versions of the wagon in the torque department, which helps to explain why it pulls so strong off the line (despite the roughly 500 lbs of extra weight associated with its battery pack).

Get too rowdy with the Kia Soul EV's right pedal and you might find yourself spinning the tires from a stop. The electric motor's horsepower deficit starts to be felt past the 60-mph mark, however, as highway passing takes more time than it would in the traditionally-motivated version of the wagon. This is also a function of the nearly 3,300 pound curb weight of the Soul EV, which impacts its handling by introducing more push than its low-rolling resistance can easily handle in the corners. Refrain from hustling the Kia and it's a smooth drive all around, but if you're in a hurry you'll quickly come up against the limitations of the platform.

The 2015 Kia Soul EV and its gasoline counterpart have almost identical interior measurements, which is a huge bonus in a segment where battery packs have a history of eating into cargo space. When Kia initially put pen to paper for the Soul, the brand's designers envisioned building an electric model further down the road, and as such made sure to include room under the rear bench for a potential battery pack. The trade-off is a slightly taller seating position for those riding in the second row - call it 'cinema-style seating,' like Land Rover does - with maybe the most marginal impact on headroom. Behind the seat there's just under 19 cubic feet of room for storing groceries and luggage, while folding the rear row forward reveals 49.5 cubic feet in total. Fill up the undertray that sits below the cargo floor (that also holds the Soul EV's charging cable) and you can take advantage of 61 cubic feet of room, making the crossover wagon a very practical EV.

Kia's differentiation of the Soul EV from the standard edition of the wagon is best described as 'restrained.' The 2015 Kia Soul EV's most obvious identifier is its front fascia, which loses the gas-powered Soul's grille in favor of a flatter, plastic visage that improves aero and also hides the charging panel that I mentioned earlier. There's fender badging to further advertise the Soul EV's electric bona fides, and of course it gets the funky wheels that are required on every EV to help it cut through the air with a minimum amount of drag.

The Kia Soul EV is available in the usual assortment of eco-conscious colors, a palette choice that extends to the cabin where my tester's 'electronic blue' exterior hue gave way to a grey-and-white scheme highlighted by blue piping on the leather seats. It's mostly status quo inside the Soul EV as compared to other versions of the wagon, with the exception of the digital gauge cluster, which offers the full gamut of range readouts, battery charge information, and other data to help you make the best possible driving decisions and maximize the distance to empty.

The 2015 Kia Soul EV that I drove came with the brand's top-tier infotainment system, which consists of an LCD touchscreen mounted on the center stack through which all communications and entertainment functions are controlled. It also features a number of EV-specific readouts, especially with regards to battery discharge.

It's a pretty interface, and it's worked well in nearly every other Kia I've had the pleasure to drive. In the Kia Soul EV, however, I experienced a number of glitches, with the worst being the system rebooting itself from time to time while simply driving around. The screen would go blank, all systems would shut down, and then after 30 seconds to a minute the infotainment features would reboot themselves. I could never figure out what triggered these outbursts, but it was inconvenient to say the least, especially when I was in the middle of using the navigation system.

Speaking of navigation, the 2015 Kia Soul EV also comes with a charging station locator that will find the juice port that's closest to your current position and provide you with directions on how to get there. Strangely, in Montreal it seemed like almost every single charging station the Soul EV tried to send me to was a Nissan dealership. This suggested two things to me: that Kia hasn't really rolled out a comprehensive charging infrastructure at its own dealerships, and that the Nissan Leaf's built-in head start on the electric car front has some distinct benefits. I never ended up taking advantage of the Nissan dealers and their available charge ports, as I could only imagine the conversation required to plug in a Brand X EV on a competitor's home turf.

Obviously, the charging station locator issue is going to vary from city to city, as each region's EV support varies in quality and quantity. What I would have liked to see was a more robust listing of public EV charging stations, of which there are at least a few in my area.

Range Anxiety Is Still Very Much A Thing

Range Anxiety Is Still Very Much A Thing

The 2015 Kia Soul EV might have the best battery range in its class, but as I discovered during my time with the wagon range anxiety is real, and pervasive. I'll give you an example: one evening I decided to go furniture shopping, and ended up at a store that cost me 45 round trip miles out of my 93 mile range total range. The very next morning I had to drive 60 miles round trip to a car show, with rain in the forecast that would have required the use of the defrost system to keep the windows clear of condensation.

You can see how the math starts to get scary here. As it was my first night with the vehicle, I wasn't sure how much of a charge I could recover in the eight hours or so before leaving for the car show, and as such I began to contemplate simply leaving the Soul EV behind and taking one of my gasoline vehicles instead.

Eventually, the situation worked itself out - there was an unlisted 220-volt charger available to me at my destination - but I use this example to illustrate how battery range can mess with your head and even alter your plans when driving an electric car. This is something you need to take into careful consideration when deciding whether an electric car is truly the best choice for your daily driving needs. If short trips in a city environment comprise 80 percent of your commuting, then you should be fine. If instead you're facing regular highway jaunts into a future where the presence of a charging station can't be confirmed, then you could find yourself subjected to the same mental mathematics and associated anxiety that I was.

I want to expound a little more on a battery range issue that I rarely see mentioned whenever electric vehicles like the 2015 Kia Soul EV are discussed. Extreme weather is the worst thing that can happy to a battery, and in the case of electric cars it translates into unpredictable effects on how much driving you can get done between charges. I can't speak to very hot climates, as I haven't had the chance to pilot an EV under the boiling desert sun, but once the thermometer starts to drop and approaches or even passes under the freezing mark, it's not unusual for battery range to be cut by as much as 50 percent. Even using the heater or the air conditioning systems in moderate temperatures, as I mentioned earlier, can knock down the number of miles you'll get out of your vehicle's battery. This isn't a Kia-specific problem, but if you live in an area where harsh winters are a reality, then I'd think twice about relying on an electric vehicle as your only transportation option. 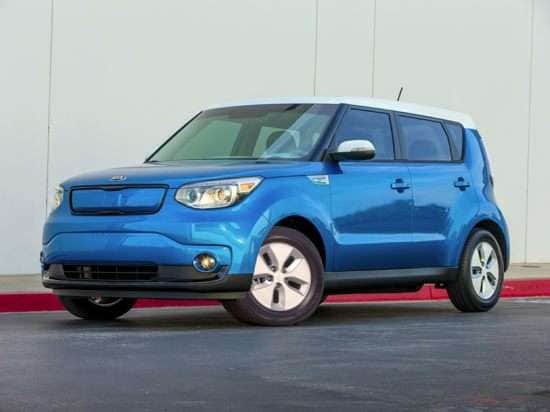