Kia continues to tinker with its crossover lineup, making some slight adjustments to style and packaging in the 2015 Kia Sorento, but leaving its starting price at $24,100.

The most noticeable changes are up front. There, the 2015 Kia Sorento shows off a revised grille that now offers two new looks, one with an anodized silver-metal appearance and the other relying on black mesh for a more athletic style. The front lower valance has been massaged as well for a more “open” look, allowing designers to integrate a stylized and sporty front intake to set off the vehicle’s LED positioning lamps and projector-style headlights. Another bonus: Beginning with the new model year, owners of the 2015 Kia Sorento will be able to order the brand’s UVO voice-recognition technology and up-scale Infinity audio system separately from its cutting-edge nav system.

Mechanically speaking, engineers have enhanced the standard 2.4-liter, four-cylinder unit in the 2015 Kia Sorento for added efficiency, with the powerplant adding 1 mpg to the vehicle’s combined and highway ratings. The new tale of the tape is 20 mpg city/27 mpg highway/23 mpg combined, and that’s without the 2015 Kia Sorento losing anything in the output department, which still delivers 191 hp and 181 lb.-ft. of torque.

Now, just to be clear here, however, while it is true that the starting price of the 2015 Kia Sorento doesn’t change—and neither does the $25,900 MSRP of the four-cylinder AWD model—there are some increases with the crossover’s available 3.3-liter V6.

Nonetheless, the 2015 Kia Sorento remains one of the sharper-looking entries in its segment and will look to cut into its rivals’ sales leads when it gets to dealerships in the near-term future. 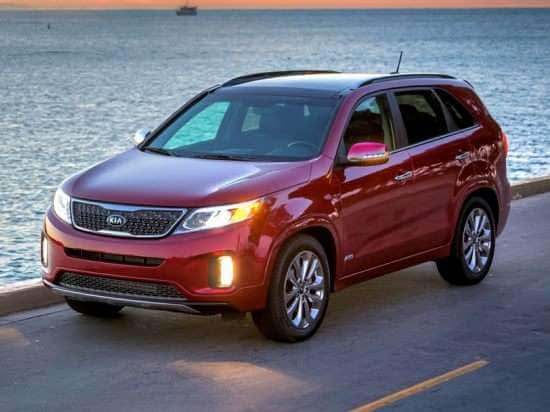