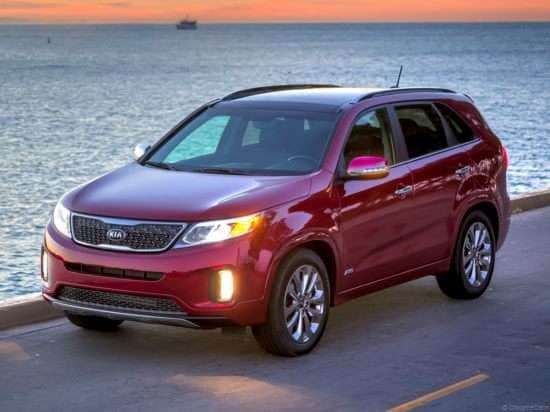 Kia sells the 2014 Sorento in LX, EX, SX, and SX Limited (SX-L) trim levels. A 4-cylinder engine is standard for the Sorento LX, while a V-6 engine is included for other models.

Last year, the 2014 Sorento’s direct-injected, 191-horsepower, 2.4-liter 4-cylinder engine was an option. This year it is standard, offered only for the LX trim level, and paired with a 6-speed automatic transmission and front-wheel drive.

The Sorento EX, SX, and SX-L get a new 290-horsepower, 3.3-liter V-6 engine. Front-wheel drive is standard, as well as the 6-speed automatic transmission.

Both engines can be equipped with new Torque On Demand all-wheel-drive system with Torque Vectoring Cornering Control and a locking center differential.

Fuel economy ratings for the 2014 Sorento range between 18 mpg in the city for the V-6 engine and all-wheel drive, and 26 mpg on the highway for the 4-cylinder engine and front-wheel drive.

As this summary is published, the National Highway Traffic Safety Administration (NHTSA) has not performed crash tests on the 2014 Kia Sorento. The Insurance Institute for Highway Safety (IIHS) calls the Sorento a “Top Safety Pick.”

For 2014, Kia equips the Sorento SX and SX-L models with Flex Steer electric steering, which offers the driver a choice between Comfort, Normal, and Sport steering calibration.

All Sorento models except for the LX are equipped with a reversing camera, a blind-spot detection system, and a new UVO (Your Voice) infotainment system with eServices. For 2014, UVO provides the ability to program speed and curfew alerts, determine geo-fenced boundaries beyond which the Sorento sends an alert that it has traveled beyond prescribed limits, and, when the airbags deploy, engages a Crash Notification Notice system designed to help speed rescuers to the scene of the collision.