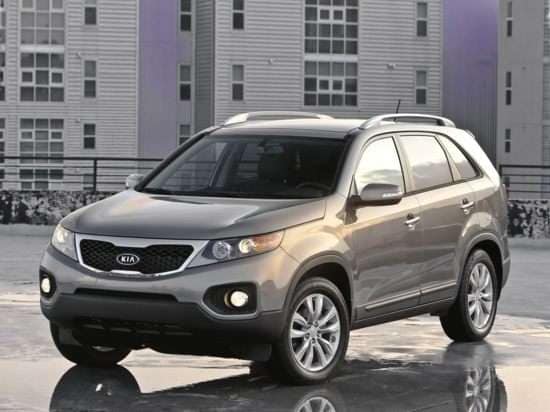 Changes for the 2013 Kia Sorento

For 2013, Kia includes an automatic transmission and the UVO infotainment system as standard equipment for all Sorento models. The base model no longer exists; the LX is now considered the entry-level model. The EX trim level comes standard with leather, and the price of the SX has dropped a bit.

Among the Sorento’s optional features are a navigation system with real-time traffic information, a panoramic sunroof and a rear entertainment system.

The standard engine for the Sorento LX is a 175-horsepower, 2.4-liter 4-cylinder engine. The EX adds direct fuel-injection on that same engine, bumping power output to 191 horsepower. The Sorento SX is powered by a 276-horsepower, 3.5-liter V-6, an engine which is optional for the LX and EX. A 6-speed Sportmatic automatic transmission is standard, delivering power to the SUV’s front wheels. All-wheel drive is optional.

The EPA estimates that the Sorento LX with front-wheel drive will return 21 mpg in the city and 29 mpg on the highway. The optional AWD system decreases those numbers to 21-mpg city/27-mpg highway mpg.

Kia’s UVO infotainment system is standard on all 2013 Sorento models, and includes voice-activated operation. It also includes a hard-drive Jukebox function and Bluetooth audio streaming. A navigation system with real-time traffic reports is optional, along with a premium sound system and a rear-seat entertainment system.