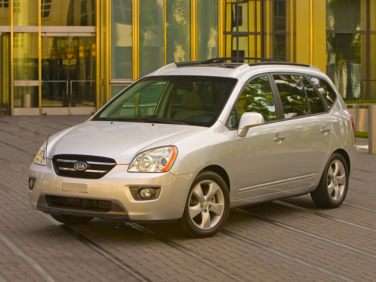 All About Kia Rondo

The Kia Rondo is a four-door front-wheel drive wagon with seating for up to seven passengers. Kia classes their Kia Rondo as a four-door wagon with front wheel drive. The first Kia Rondo was introduced in 2007. It’s a shorter model than one would expect but is surprisingly roomy on the inside. There are three rows of seating with the second row being adjustable to offer more legroom space for the passengers. The Rondo is built on the same platform as the Optima sedan. The Rondo offers a car-like ride but the style bears comparison to a mini-van. The vehicle first came to the North American market in 2007. It is sold on the European market as the Kia Carens.

The vehicle entered the 2008 model year with only minimal changes. These include switching out the cassette player for an auxiliary jack for MP3. New options include wheel locks.

There is a choice of engines for the Kia Rondo. Both are available for the base LX or EX trims. The standard engine is a 2.4 L four-cylinder engine offering 162 horsepower with 164 lb-ft of torque. Then there is a 2.7 L V6 engine offering 182 horsepower with 182 lb-ft of torque. The four-cylinder is matched with a four-speed Sportmatic automatic transmission. The V6 is paired with a five-speed automatic with the same Sportmatic feature, which allows the driver to select the gears himself.

The EPA fuel economy rating for the Kia Rondo is 19 miles per gallon in the city and 26 mpg on the highway.

This crossover is definitely worth a second look if carrying passengers is a priority as the four-door Rondo can be configured to carry up to seven passengers and still carry cargo. For the price, this vehicle offers a lot of functionality and driving fun.

The Kia Rondo offers a smooth ride partly due to the MacPherson struts in the front with a multi-link setup in back. For an added advantage in handling and safety are anti-roll bars in both the front and back. The Kia Rondo is not as fully loaded with features as some vehicles in its class, however there are enough to keep most consumers happy. The base LX model comes standard with seating for five passengers, alloy wheels and a full complement of power windows. Go up to the LX and there is air conditioning and roof rails. Another step up is the EX. At this level, there are larger alloy wheels, chrome trim, a better seat fabric, keyless entry, fog lamps, leather-wrapped steering wheel with audio controls, and an MP3-compatible CD system.

Options for the EX include a power sunroof and heated leather seats. For the LX, the options include remote keyless entry, cruise control and an alarm system. The only option for the base LX model is air conditioning.

The safety standard for the Kia Rondo is very good. Even the lowest LX trim has stability control and anti-lock brakes. All of the vehicles offer front active headrests and six airbags as standard. These airbags include the dual front seat-mounted sidebags and full-length side curtain airbags. In addition, standard on all models are four channel anti-lock braking system and electronic stability control. Other features include front crumple zones, rear child safety door locks, and side-impact door beams.

The 2009 Kia Rondo is a carryover from 2008, with the exception of a new engine provided in the base model. The 2009 Rondo is sold in either LX or EX trims, with the option of a 4 or 6-cylinder engine for each. The smaller power plant is new for 2009, a 2.4 liter unit that produces 175 horses and 169 lb-ft of torque. A 4-speed automatic handles gear shifting duties, and fuel economy is rated at 20 miles per gallon around town and 27 miles per gallon on the highway. Buyers can choose to upgrade to a 2.7 liter V6 that churns out 192 horsepower and 184 lb-ft of torque. Mated to a 5-speed automatic transmission, fuel mileage comes out to 18 miles per gallon in stop and go driving and 26 miles per gallon in highway cruising.