Trucks and Crossovers may dominate the monthly leaderboards concerning volume, but the subcompact 2016 Kia Rio has an unusual distinction: It’s grown in sales at a faster rate so far this year than any of the big-3 pickups or the nation’s top trio of crossovers. Needless to say, the Rio’s massive surge in popularity—even as rivals like those from Toyota and Ford sit firmly in the red—is based on a lot of factors. It certainly helps that the car was refreshed for the 2016 selling season and that it continues to offer both sedan and hatchback body styles, competitive fuel economy ratings, and high-value pricing. Let’s see how it all comes together in the 2016 Kia Rio EX sedan.

Now, there is a fairly large jump in MSRPs between the entry-level Rio sedan, which starts from $14,165, and the 2016 Kia Rio EX version. In the latter trim, the Rio sedan has a sticker price of $17,775 that represents a $3,590 increase over the base model. A big chunk of that covers the standard Sportmatic 6-speed automatic transmission for the EX, as a 6-speed manual is standard for the starter Rio, and other important enhancements include power windows/door locks, cruise control, and an infotainment system that adds two more speakers and Bluetooth connectivity. The Rio EX could end up seeming a little pricier than its rivals if the comparison ended there. However, it also has a significant advantage under the hood, at least for owners who value peppy performance.

The standard 1.6-liter engine for the 2016 Kia Rio EX is a 4-cylinder unit that makes 138 horsepower and 123 lb.-ft. of torque, and while that isn’t much compared to what’s available in larger cars, it counts as serious output among the subcompacts. Just contrast the Rio’s numbers with those from the Toyota Yaris (106 horsepower/103 lb.-ft. of torque) or Nissan Versa (109 horsepower/107 lb.-ft. of torque). And at the same time, the Rio EX achieves EPA ratings of 27 MPG city/37 MPG highway/31 MPG combined with its automatic transmission, so it’s more fuel efficient that the Versa with its standard automatic; the Yaris fuel ratings are at 30/36/32 with its own standard automatic.

It can be tough for designers to get the proportions right for a subcompact sedan, yet the Kia team was clearly up to the task here. The 2016 Kia Rio has an athletic stance highlighted by subtle sculpting along the car’s flanks, which in turn creates a distinctive trapezoidal shape. At the front, it comes to a dynamic point just behind the wheels, and it transitions into the wheel arches at the rear. The freshened front end appearance of the car shows a large lower intake and slim upper grille, and prominent fog lights emerge from restyled pockets in the EX. Meanwhile, the back of the car is clean and uncomplicated, with a slight decklid spoiler that flows right out of the vehicle’s upper side character lines.

This section of our 2016 Kia Rio EX review reveals another advantage for customers since the car has the most front-seat legroom (43.8 inches) and front-seat legroom of any subcompact sedan. Conditions are tighter for second-row occupants, although even here the Rio has more headroom than rivals like the Ford Fiesta or Nissan Versa sedans. The Kia’s trunk also has a 13.7-cubic-foot capacity that’s 7 percent larger than that of the Fiesta.

The design of the Rio’s cabin then displays the kind of stylish details that have become a hallmark of the brand. The outboard front HVAC vents, for example, have intricately sculpted frames and the door panels are carved to provide more space for passengers’ arms. The EX grade additionally benefits from upgrades such as a standard leather-wrapped steering wheel and premium cloth seating.

Though the 2016 Kia Rio EX serves up a standard 6-speaker audio system with USB/auxiliary inputs, a CD player, SiriusXM Satellite Radio, Bluetooth and steering-wheel-mounted controls, infotainment is not a strong suit of this particular model. That said, the extra tweeters mounted in the car’s A-pillars do improve the listening experience noticeably versus the Rio LX. But there’s no touchscreen here or advanced connectivity features, as are standard on some similarly priced rivals. Nor is Kia’s UVO telematics service standard on the EX trim.

Instead, the Kia looks to make up for some of what it lacks with the two available packages that are covered next.

You can order the 2016 Kia Rio EX with a choice of two option packages, both of which allow owners to add key equipment without having to move all the way up to the range-topping Rio SX trim at $20,755.

The ECO Package, unsurprisingly, puts a focus on fuel economy. Thus, it includes Kia’s Idle Stop & Go system, to turn off the car’s engine during stops, such as at traffic lights, then seamlessly restart the power plant when the driver is ready to accelerate. Per the EPA, that helps squeeze out a full 1 MPG increase in city driving.

The Designer Plus Package is new for 2016 and furnishes a black-and-gray 2-tone interior color theme for a more premium-looking cabin.Each package also includes a 4.3-inch infotainment touchscreen and rearview camera system.

Beyond that rearview camera system, the 2016 Kia Rio EX comes with hill-start assist and the usual run of stability and braking technologies. Electronic stability control, vehicle stability management, electronic brake-force distribution and 4-wheel anti-lock disc brakes are all on board, as are robust side-impact door beams and front and rear crumple zones.

We should also mention that the Rio struggled with the IIHS Top Safety Pick testing and earned a 4-Star Overall Safety Rating from NHTSA—which reported a specific “Safety Concern,” too. (For more information, see NHTSA’s website here.)

As for the hatchback model mentioned elsewhere in our 2016 Kia Rio EX review, that’s the Rio 5-Door, with an MSRP of $17,905. True, that means Kia charges more for its subcompact hatch than for the sedan, but so do the rival automakers, and the difference here of $240 is among the smallest in the segment. Despite this fact, the Rio 5-Door also has one of the segment’s largest cargo capacities. With its rear seats folded down, there’s 49.8 cubic feet of storage in the Rio hatchback—an advantage of more than ten cubic feet over the Nissan Versa Note hatch and a whopping 24.4 more than in the Ford Fiesta hatchback. The Rio 5-Door can fit 15 cubic feet of gear behind the rear seats as well.

Especially given the relative scarcity of subcompact sedans for the current model year—when only five are on the market from mainstream brands—the 2016 Kia Rio EX clearly has what it takes to appeal to the segment’s shoppers. Thinking of NHTSA’s safety concerns for the Rio in the right context, the Ford Fiesta and Hyundai Accent sedans have them as well. Both of those rivals, plus the Nissan Versa sedan, join the Rio in receiving 4-Star Overall Safety Scores from NHTSA.

Further, Kia itself has plenty of confidence in the Rio, covering it with an “industry-leading” warranty program that boasts: 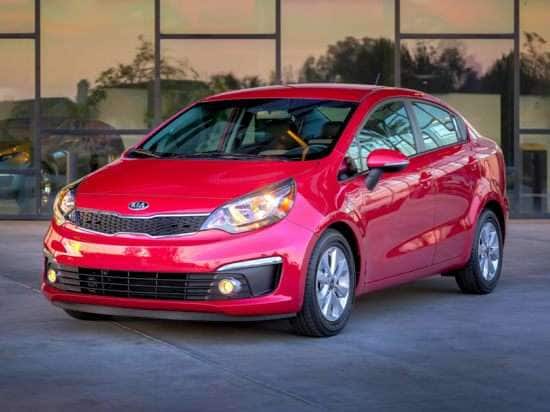