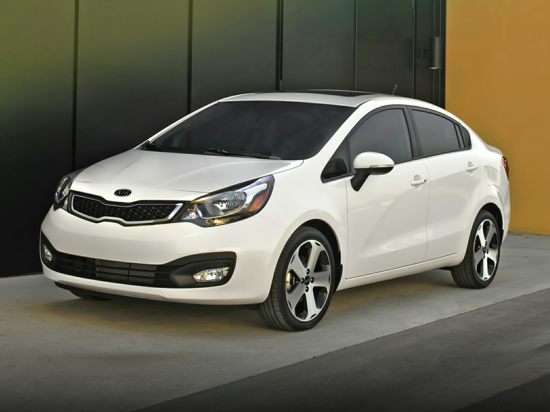 We know you’re going to be broken-hearted, but Kia no longer offers the Rio 5-Door in Silverstone Beige.

The 2015 Kia Rio is sold as a 4-door sedan and a 5-door hatchback. Each comes in LX, EX, and SX trim levels, the latter version equipped with a sport-tuned suspension, transmission paddle shifters, bigger front brakes, and larger 17-inch aluminum wheels with more aggressive tires.

Choose the Rio EX over the LX and the car comes with nicer trim and seat fabric, a better stereo, Bluetooth, cruise control, power windows, power door locks, remote keyless entry, a tilt/telescopic steering wheel, a center console with a sliding armrest, and an automatic transmission.

Every Rio comes with a 138-horsepower, 1.6-liter 4-cylinder engine. Before you write that off as underpowered, consider that it is actually one of the more robust engine offerings in the subcompact car class.

No matter which version of the 2015 Kia Rio you choose, you can expect to get 31 mpg in combined driving, according to the EPA. Yes, even if you buy the Rio EX and equip it with the Eco Package and the Idle Stop & Go technology.

According to the NHTSA, the 2015 Kia Rio earns an overall rating of 4 stars in crash tests. Last year, the Insurance Institute for Highway Safety (IIHS) gave the Rio a “Marginal” rating for small overlap frontal-impact protection, an “Acceptable” rating for side-impact protection, and a “Good” rating in other tests. Unless Kia has made unannounced structural changes in the hopes of improving these ratings, they’ll carry over for 2015.

Kia also offers its UVO infotainment system for the Rio, optional for the EX and standard for the SX. It includes smartphone pairing and connectivity, Bluetooth music streaming capability, and a reversing camera, and on the SX it can be upgraded with a voice-activated navigation system. The Rio SX is also available with passive keyless entry and push-button engine starting.