The Kia Rio is a four door five passenger subcompact powered by a 1.6 Liter four cylinder engine that produces 138 HP and 123 lb-ft of torque being channeled through an electronically controlled six speed automatic transmission, except in the case of the base model’s six speed manual, and is good for an estimated 30 MPG in the city and as much as 40 MPG on the highway.  Kia offers the Rio sedan in three trim levels, starting with the $13,400 manually shifted LX, which climbs to $14,500 with an automatic, the better equipped EX starting at $16,300 as well as the top of the line $17,500 Kia Rio SX.  The Kia Rio 5-door is a four passenger hatchback offered in the same LX, EX and SX trims for only a couple hundred dollars more each.

From the outside, the Rio range rides around on an assortment of rolling stock.  The LX and EX come standard with a set of 15 inch steel wheels with covers, while the EX offers available 15 inch alloys and the SX gets a set of 17 inch rims as well as a sport tuned suspension standard.  The base LX gets a black mesh grill, while the EX and SX add a chrome surround.  The midlevel EX also gets optional power folding mirrors with integrated turn signals, a feature that comes standard on the SX, and the top of the line Rio also gets LED accents in the headlights as well as tails to go with the bespoke dual tip exhaust.

Power locks with a keyless remote is one option that makes getting into the LX a little easier, and comes standard on all other models, the EX and SX get a tilt and telescoping steering column as well as a center console with sliding armrest and storage.  The entry level LX gets cloth seating while EX and SX get Premium knit cloth and the SX even offers optional leather with heated front buckets.  Other optional features for the EX include a leather wrapped steering wheel and gear shifter as well as a soft touch dash, all standard on the SX.  Both the upper level Rios benefit from a metal-painted interior trim pieces, but the SX gets matching metallic sport pedals.

Popular upgrade packages for the Kia Rio include the LX Power package, which adds power windows and locks to the base model.  The EX Convenience package which adds a set of 15 inch alloys, the UVO powered by Microsoft infotainment system with rear view camera, leather wrapped steering wheel and shift knob, integrated turn signals in the side mirrors and the soft touch dash.  While the SX Premium package benefits from a navigation unit with Sirius XM Traffic and back up camera, push button starter, leather wrapped and heated seats up front as well as a power tilt/slide sunroof, transforming the little economy car into a well-equipped tech center.

A list of cars similar to the Rio includes the 2012 Ford Fiesta, 2012 Hyundai Accent and 2012 Chevrolet Sonic. 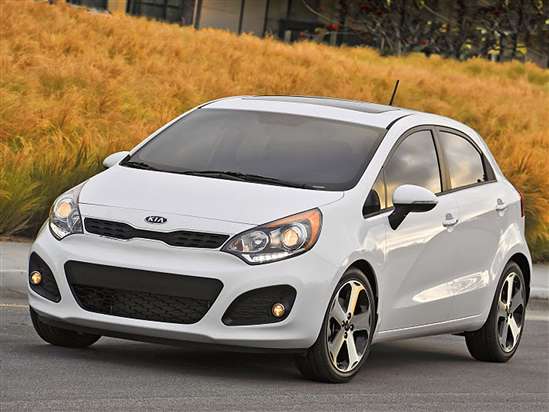