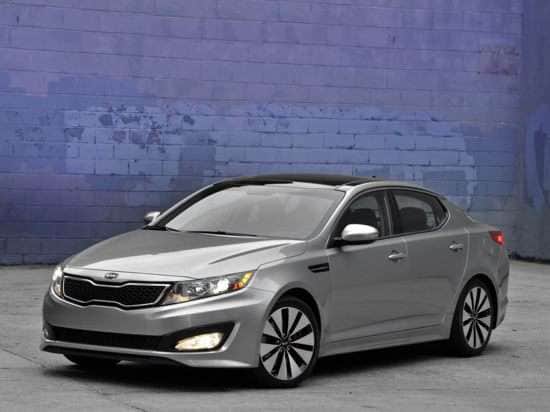 Kia has streamlined the Optima lineup for 2013, dropping the manual transmission that used to be standard for the LX model, removing the turbocharged engine option from the EX model’s menu, and adding a new SX Limited (SX-L) model dripping in luxury.

The 2013 Kia Optima is offered in LX, EX, SX, and SX-L trim levels. An Optima Hybrid model is also offered, and is covered in a separate summary.

To get a sense of what isn’t included on the base Optima LX, take a look at the standard equipment provided for the EX model. In addition to leather seats, the Optima EX has an 8-way power driver’s seat, larger aluminum wheels, keyless entry with push-button start, dual-zone automatic climate control with rear air vents, an auto-dimming rearview mirror, a universal garage door opener, floor mats, and nicer interior trim.

A 200-horsepower, 2.4-liter 4-cylinder engine is standard for the Optima LX and EX, while the SX and SX-L receive a turbocharged, 2.0-liter 4-cylinder engine. The turbocharged engine generates a healthy 274 horsepower and, perhaps more important, 269 lb.-ft. of torque between 1,750 rpm and 4,500 rpm. A 6-speed automatic transmission is standard for both power plants, and includes Sportmatic manual operation.

According to the EPA, the 2013 Kia Optima’s fuel economy ranges from a low of 22 mpg in the city for the turbocharged engine to a high of 35 mpg on the highway for the standard 2.4-liter 4-cylinder. In combined driving, the Optima LX and EX return 28 mpg, and the Optima SX and SX-L provide 26 mpg.

Because the Optima performed well in the new small overlap frontal-impact crash-test administered by the Insurance Institute for Highway Safety (IIHS), the car is called a “Top Safety Pick+” for 2013. The National Highway Traffic Safety Administration (NHTSA) gives the 2013 Optima a 5-star overall crash-test rating, the highest possible. It simply doesn’t get better than this.

The 2013 Optima is offered with UVO smartphone pairing technology. Short for “Your Voice,” the system understands about 150 voice commands issued by the driver after pushing a button on the steering wheel.