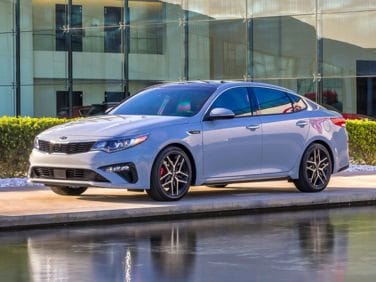 All About Kia Optima

The Kia Optima is a four-door, five-passenger, front-wheel drive, mid-size car. With the Optima, Kia has added in many luxury features to an already reasonably priced package. There are two trims available, the LX or the EX. The vehicle was upgraded in 2007 and moved into 2008 with only minor changes. A couple of these changes include black mirror casings and the addition of an audio input jack.

Inside the vehicle is space – for the driver, the passengers and the cargo. The trunk offers 15 cubic of storage space and the rear passenger seats split and fold down offering even more space, particularly with the trunk pass-through. Under the hood of both the LX and EX can be either a base 2.4 L I4 with CVT variable valve timing engine offering 162 horsepower or an optional 2.7 L V6 engine. In the base LX this four cylinder engine comes standard with a five-speed manual transmission with overdrive or a five-speed automatic transmission. The 2.7 L V6 has variable valve timing and produces 185 horsepower. The EX four-cylinder engine model and the LX and EX with a V6 engine are only available matched with the automatic transmission. The new five-speed automatic has a Sportmatic system that allows the driver manual shifting.

Along with the sporty handling, the Optima is responsive with excellent cornering due to the multi-link rear suspension and anti-roll bars at both ends.

The EPA fuel economy rating for the Kia Optma is 21 miles per gallon in the city and 31 mpg on the highway.

For the LX, there are full power features, tilt telescopic steering and a CD/MP3 player. With an automatic transmission model, also included are cruise control and steering wheel mounted controls. With the step up EX model, there is a power driver seat, automatic climate control, trip computer, fog lights, dual exhaust, auto-dimming rearview mirror, leather trim and chrome touches everywhere. Leather seats are available as an option on the EX as are power passenger seats and sunroof. The EX also has a 360 watt Infinity sound system that has a six-disc CD changer and MP3 integration. The system contains nine speakers with a rear subwoofer and can bring in eight channels.

For the LX model there is air conditioning, an eight-way adjustable driver’s set, a CD sound system boasting six speakers, a full complement of power accessories, a 60/40 split rear seat and even heated outside mirrors. If the LX is equipped with an automatic transmission then add in cruise control, keyless entry with alarm system, steering wheel-mounted audio controls and the ever popular tile/telescopic steering wheel.

Kia has a strong safety image and includes many standard safety features. Some of these are active headrests, six airbags for the front, side curtain and side impact for both rows of passengers. Four wheel disc brakes are standard but some features consumers have come to expect such as anti-locking braking, brake assist and electronic stability control are only available as part of the Electronic Stability Package for the EX and V6 models. The airbag system helped the Kia Optima to earn a five star rating in the government crash tests.

The 2009 Kia Optima was reskinned for the 2009 model year and received a new drivetrain for the base model. The 2009 Optima can be had in LX, EX and SX trims, with a V6 option for the EX and SX. The standard 4-cylinder engine found across all models is a fresh 2.4 liter unit that provides 175 horsepower and 169 lb-ft of torque. Buyers can choose between a 5-speed manual or automatic transmission, and fuel economy is rated at 22 miles per gallon in the city and 32 miles per gallon on the highway. The V6 in the EX and SX is rated at 190 horsepower and 184 lb-ft of torque, and comes exclusively with a 5-speed automatic. Fuel mileage comes in at 20 miles per gallon in town and 28 miles per gallon on the highway.