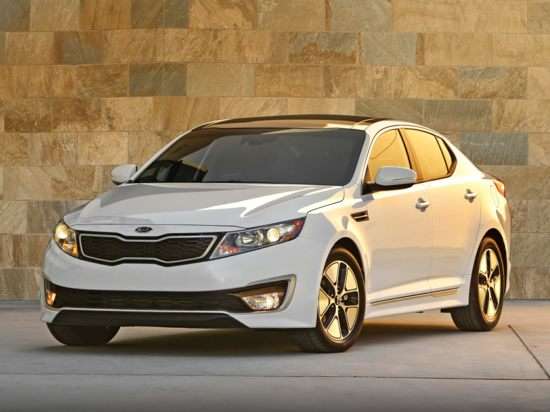 Changes for the 2013 Kia Optima Hybrid:

Kia updates the Optima Hybrid’s gas-electric powertrain for 2013, subtracting a little bit of horsepower but adding a healthy dollop of torque. Fuel economy ratings rise a bit, the trunk gains volume, and this model is now offered in LX and EX trim levels.

The Kia Optima Hybrid is equipped with a gasoline-fired 2.4-liter 4-cylinder engine, an electric assist motor, and lithium polymer batteries recharged through a regenerative braking system. Combined, the components make 199 horsepower and 235 lb.-ft. of torque. Unlike many hybrids, the Optima has a traditional 6-speed automatic transmission instead of a continuously variable transmission (CVT). It even gets a Sportmatic manual shift mode.

The Optima Hybrid LX is rated to get 36 mpg in the city, 40 mpg on the highway, and 38 mpg in combined driving. The new EX trim level loses a single digit for each measurement due to extra weight and a larger wheel/tire combo.

In addition to being stylish and fuel efficient, the Optima Hybrid is safe. The National Highway Traffic Safety Administration (NHTSA) says the 2013 Optima provides 5-star crash protection, while the Insurance Institute for Highway Safety (IIHS) calls the Optima a “Top Safety Pick+”. The “+” is because the Optima received an “Acceptable” rating in the tough new small overlap frontal-impact crash-test, which is designed to measure protection in the event the car strikes a tree, a pole, or an oncoming vehicle on the front left corner.

The Kia Optima Hybrid is what is known as a “full hybrid,” which means it can operate on battery electricity alone at lower speeds and for short distances. The Optima Hybrid has an EV, or electric vehicle, mode, and when this is engaged, the car’s engine shuts off while coasting at relatively high freeway speeds to help conserve fuel and recharge the battery pack.