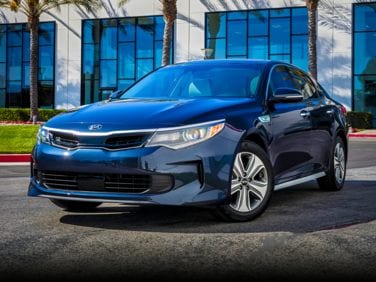 All About Kia Optima Hybrid

The Kia Optima Hybrid is the gasoline-electric drivetrain version of Kia Motors’ mid-size four-door sedan. The Kia Optima has been available since 2000, and different versions of the Optima are available around the world. Though the Optima goes by several different names (especially in South Korea, the car’s domestic market), the traditional gasoline version of the Optima was considered key to bolstering Kia’s reputation as a reliable manufacturer of high quality family-oriented cars. The Kia Optima Hybrid made its debut as a 2011 model year car.

The first generation of the Kia Optima was a rebadged Hyundai Sonata, made possible because of Hyundai’s ownership of Kia Motors. The Optima differed slightly from the Sonata in aesthetics and mechanicals, since Hyundai was positioned above Kia in the marketplace and the cars had to be priced accordingly. This generation was produced until the 2005 model year, and then the Kia Optima underwent several facelifts and revisions until the Kia Optima Hybrid was introduced. The Kia Optima steadily gained a reputation for reliability and value. Design updates and the addition of new comfort and safety features made the Optima a prime candidate to be introduced with a hybrid drivetrain.

The Kia Optima Hybrid is based on the updates that were given to the Optima for the 2010 model year and introduced at the New York International Auto Show. It is the third generation of the Optima, and it features a sportier exterior profile that reflects Kia’s overall design direction and fits well into the model lineup. When the third generation Optima was introduced, Kia announced that the car would be equipped with a full range of safety systems, as well as features and options such as push-button start, iPod connectivity, Bluetooth wireless integration, and a panoramic moonroof. The redesigned Optima, in gasoline format only, became available for sale in the fall of 2010, just in time for the Kia Optima Hybrid to be announced at the 2010 Los Angeles Auto Show. It went on sale in the United States in November of 2011.

Like the traditional gasoline Optima’s relationship with the Hyundai Sonata, the Kia Optima Hybrid is closely related to the Sonata Hybrid. It borrows the Sonata Hybrid’s drivetrain, which features a 2.4-liter gasoline engine paired to a 30 kW electric motor and lithium polymer batteries, and a six-speed automatic transmission. The Optima Hybrid can travel in full electric mode up to 62 miles per hour, and the drivetrain yields fuel economy ratings of 37 miles per gallon in the city and 39 miles per gallon on the highway. Mechanical specs for the European and Korean versions of the Optima Hybrid differ somewhat, featuring a 2-liter turbocharged gasoline engine instead of the 2.4-liter unit.

The Kia Optima Hybrid blends well into the Kia lineup, since it is nearly visually identical to the standard gasoline version of the Optima. The Optima Hybrid gets hybrid badging, an exclusive paint color, and a slightly lower ride height, but otherwise follows the same styling and aesthetics of the Optima model range. A facelifted 2014 Kia Optima was previewed at the 2013 New York International Auto Show, and it’s likely that the revisions on the base Optima will soon make their way to the hybrid version.