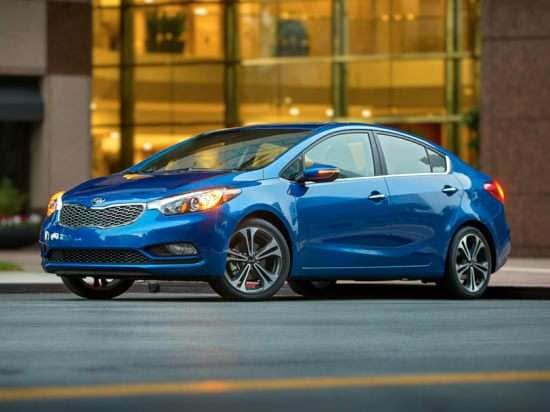 One year after a complete redesign, the Kia Forte returns with minor enhancements. The Forte Sedan earns a slight bump in fuel economy ratings, while all LX and EX models are available with a new option package that groups UVO eServices technology with a reversing camera.

The 2015 Kia Forte is sold as a 2-door coupe, a 4-door sedan, and a 5-door hatchback. Sedans are available in LX and EX trim levels. The coupe (called the Koup) and the hatchback (called the Forte5), are sold in EX and turbocharged SX trim.

The Forte LX Sedan has a 145-horsepower, 4-cylinder engine parked under its hood. A 6-speed manual gearbox is standard, with a 6-speed automatic available as an option.

For more power, choose the Forte EX, which includes a 173-horsepower, 2.0-liter 4-cylinder engine but trades the extra oomph for a reduction in fuel economy. This engine comes only with a 6-speed automatic transmission in sedans and the Forte5, but can be fitted with a manual gearbox in the Koup.

Forte5 and Koup models equipped with SX trim get a turbocharged, 1.6-liter 4-cylinder engine good for 201 horsepower. A 6-speed manual is standard; a 6-speed automatic is optional.

If you’re seeking to maximize fuel economy, choose the Forte Sedan. It is EPA-rated to return between 29 mpg and 31 mpg in combined driving, with the LX model slightly more thrifty than the EX model.

The Forte5 and Forte Koup get 27 mpg to 28 mpg, with the automatic transmission proving most fuel-efficient. Upgrade to the turbocharged SX model, and you’re looking at getting 24 mpg to 25 mpg, with the Koups slightly more efficient than Forte5 models.

According to the NHTSA, the Kia Forte Sedan earns a 5-star overall crash-test rating. As this summary is written, the Forte5 gets 5-star side-impact ratings, but has not been tested for frontal-impact protection. The Forte Koup has not been assessed whatsoever.

The Insurance Institute for Highway Safety (IIHS) is unhappy with the Forte Sedan’s performance in its small overlap frontal impact test, in which the car receives a “Poor” rating. In fact, the IIHS has characterized the Forte as one of the three worst performing vehicles it has ever subjected to this particular crash test. In other IIHS assessments, the Forte gets the highest rating of “Good.”

Kia’s UVO eServices infotainment system is optional for the LX and EX and standard for the SX. In addition to supplying Bluetooth connectivity and a reversing camera, UVO eServices offers a 911 Connect function that automatically dials for assistance if the Forte’s airbags deploy in order to help speed emergency personnel to the scene of the collision.

Additional UVO eServices features include Bluetooth streaming audio, access to Internet radio stations, a Jukebox function, and features designed to help the car’s owner find it in a crowded parking lot. Speed, curfew, and geographic boundary alerts can also be programmed into the system, and it comes with a navigation system.