We're titling this segment "How To Pull Off A Stylish Compact Sedan" by the 2014 Kia Forte. No, we're not kidding. The new 2014 Kia Forte is a dramatic departure from the last-generation model not only in looks, but in many other ways as well.

Let's start with the looks. The 2014 Forte sedan we believe is one of the best looking compact sedans on the marketplace. The front end shares many traits found on other Kia models such as the large tiger mouth grille and sharp headlights. The side profile mimics the smaller Rio sedan and larger Optima sedan. There is also a set of sixteen-inch alloy wheels standard on the EX model. You can upgrade to a set seventeen-inch wheels.

Moving inside, the Forte looks and feels a lot more premium. This is thanks to a new design featuring more curves and nicer materials used throughout. Standard equipment on the EX includes keyless entry, backup camera, a cooled glove box, the UVO infotainment system, and new for the 2014 Forte, UVO eServices. eServices uses your smartphone to provide emergency services, maintenance information, making appointments with your dealer, and much more.

Powering the 2014 Forte EX is a 2.0L direct-injected inline-four with 173 horsepower and 154 pound-feet of torque. A six-speed automatic is the only transmission available with this engine. The EPA rates the 2014 Forte EX at 24 City/36 Highway/28 Combined.

Competitors to the 2014 Kia Forte EX include the Ford Focus, Honda Civic, and Hyundai Elantra. 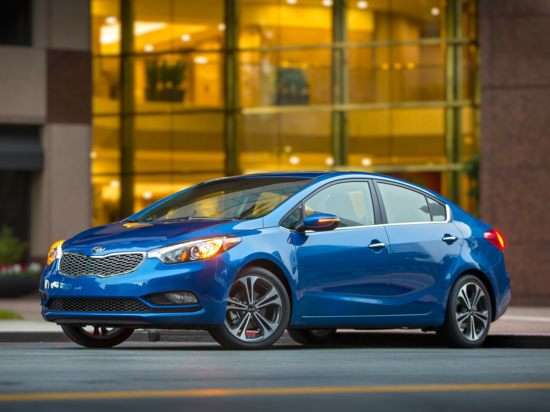