The Kia Forte is a four door five passenger compact economy sedan that the Korean automaker offers in four variants including automatic and manual versions of the entry level LX, the well equipped EX and the top of the line SX.

The base Forte LX starts at $15,200 and is powered by a 2.0 Liter four cylinder that makes 156 HP and 144 lb-ft of torque being shifted with a manual transmission to the tune of 25 MPG in the city and as much as 34 MPG on the highway wearing a set of 15 inch steel wheels.  On the inside the LX gets an AM/FM/XM/CD/MP3 four speaker stereo with USB and AUX inputs as well as Bluetooth hands free connectivity; while for $16,200 the LX gets an estimated 26 MPG around town and up to 36 MPG at speed thanks to a gas saving six speed automatic.

The next step up the Kia Forte food chain is the EX, starting at $17,600 it gets 27 MPG in the city and as much as 37 MPG on the highway due to an even more efficient six speed electronically controlled Sportmatic gearbox.  The EX rides around on a set of 16 inch alloys and is separated from lesser Fortes by the turn signals integrated into the side mirrors, while on the inside the EX gets power windows and power locks as well as a six speaker stereo.  Optional equipment includes chrome door handles, push button starter and power sunroof with tilt as well as a Navigation system with Sirius XM Traffic and Rear Camera Display.

The top of the line Kia Forte SX is powered by a 2.4 Liter four cylinder that generates a total of 173 HP and 168 lb-ft of torque that gets an estimated 23 MPG on city streets and as much as 32 MPG at speed.  The Forte SX rides on a set of stylish 17 inch alloys hiding a sport suspension; on the inside, the SX gets sport cloth, with optional leather, as well as a leather wrapped steering wheel and shifter, metal interior accents and pedals as well as a chrome exhaust to finish off the SX, starting at $19,100.

Similar models include the Honda Civic, Toyota Corolla and the Ford Focus. 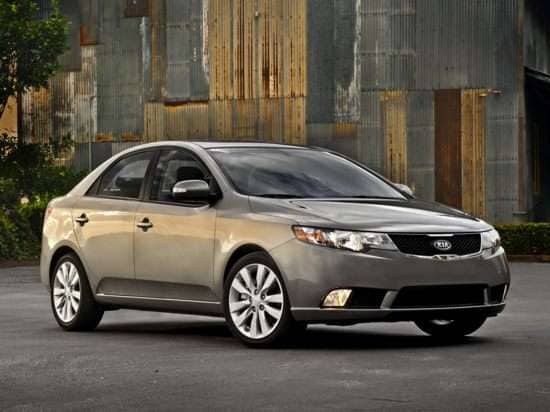