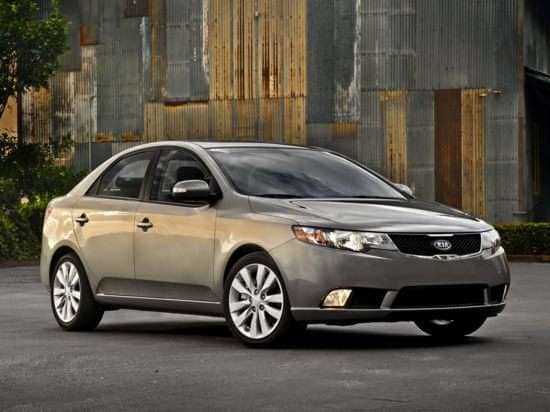 As one of only three automakers in the United States that managed to buck last month’s horrific sales decline, Kia Motors doesn’t look like it plans to let that momentum slip. Inspired by the 2008 Kia KOUP Concept, the 2010 Kia Forte will replace the Spectra when it goes on sale this year. Unlike the concept, the Kia Forte is a sedan, but that always leaves an even sportier two-door variant as a possibility for the U.S. market.

Like the Genesis is for Hyundai, Kia is hoping that the new Forte will bring new attention and more customers to the brand. When the 2010 Forte hits showrooms in late spring or early summer this year, it will be offered in three trim levels like the current Spectra, – LX, EX and the sporty SX – but an optional Fuel Economy Package will also join the lineup, and it should compete quite well against cars like the Chevrolet Cobalt XFE and Toyota Corolla LE. No pricing has been announced, but it shouldn't stray too far from the 2009 Spectra’s starting MSRP of $14,200.

From the prominently displayed Kia badge in the blacked-out front grille to the integrated rear decklid spoiler, the new Forte introduces an all-new design language for Kia that will hopefully be used on future cars. Somewhere in between the passive design of the current Spectra and the funky styling of the boxy 2010 Key Soul, the new Forte should look pretty good next to most of its competitors.

Not to take anything away from the new Kia’s sporty looks, but from the front angle there is more than a little resemblance to the current Honda Civic or Acura TSX. The sloped windshield, short hood and angular headlights help give the Forte an aggressive stance, while its sleek design helps to return pretty decent fuel economy numbers. Crisp body lines, like the athletic “shoulders” above the front wheels and the swept creases running from the exterior mirrors back to the decklid, help to give the new sedan a clean look. While a coupe model has been approved (just not for the U.S. market…yet), the hatchback version of the Spectra, the Spectra5, will actually be replaced by the all-new Kia Soul. Although the 2010 Kia Soul is a versatile hatchback, the sportier Forte would have probably been a better choice to go up against one the most lauded cars in the compact hatchback segment, the Mazda MAZDA3.

As nice is the 2010 Forte is to look at from the outside, the car’s cabin offers an even more welcoming environment. The best improvements to the Forte’s cabin are perhaps its sportier instrument panel and center stack. While the Spectra’s cabin showed its economy car status, the new Forte offers a more spirited driving experience. Although the basic design and scheme of the center stack were carried over from the Spectra, the 2010 Forte’s cabin is much more accommodating, sporty and technologically advanced.

The new sedan rides on a longer wheelbase and a wider track that directly add up to a larger passenger compartment, which Kia says is the largest in its class. Even the trunk offers almost 15 cubic feet of space. For amenities, power windows and door locks are standard across the board, and the Forte SX adds a telescoping steering column and sport cloth seating. All models come standard with an AM/FM/CD/MP3 stereo with Sirius Satellite Radio with auxiliary input jack, two 12-volt power outlets, a USB port and Bluetooth connectivity. The Forte EX and SX models add a six-speaker surround sound audio system with redundant steering wheel controls.

In LX and EX trim, the 2010 Kia Forte will be equipped a 156-horsepower, 2.0-liter inline-4 with either a four-speed automatic or five-speed manual transmission pulling the shifting duties. The sportier Forte SX will get a bump in displacement and horsepower, up to 2.4 liters and 173 horsepower, as well as using a five-speed automatic or six-speed manual. The aforementioned Fuel Economy Package will pair up the smaller 2.0-liter engine with the SX’s five-speed automatic transmission along with adding electric power steering, low-rolling resistance tires and aerodynamic enhancements to attain estimated fuel economy of 26 miles per gallon in the city and 36 mpg highway - close to the best in class Cobalt XFE’s 37 highway mpg rating. Paired with the four-speed automatic, the Forte will get 25 mpg city and 34 mpg highway; no estimates were given for the Forte SX or manual transmission options.

Like the Spectra, the Forte uses an independent front suspension with MacPherson struts and a stabilizer bar, but the rear suspension now uses a torsion beam with struts and coil springs. This setup, compared to the Spectra’s dual-link rear suspension, should provide a better balance between handling and comfort. In keeping with its sporty theme, Kia equipped the Forte SX with a sport-tuned suspension for firmer and more responsive handling as well as larger front brakes for improved braking performance. Like the rest of Kia’s lineup, the Forte is covered by a five-year/60,000-mile basic warranty and a 10-year/100,000-mile powertrain warranty.