Hey, remember the 2014 Kia Forte Koup? It's understandable if it's slipped your mind, since Kia itself has been more focused on up-level entries like the 2014 Kia Cadenza and Kia K900. And it doesn't help that the two-door Kia is one of just a handful of compact coupes available in the U.S. today, along with similarly configured versions of the Honda Civic and Hyundai Elantra. Or that one of the segment's traditional roles, providing enthusiasts with low-cost, high-fun driving options, has been effectively taken over by the growing tide of hot hatches.

But even with all that in mind here's something drivers shouldn't forget: The 2014 Kia Forte Koup is now being offered with the same 1.6-liter turbocharged four-cylinder engine used in the Hyundai Veloster Turbo. The powerplant still makes the same 201 hp and 195 lb.-ft. of torque that enthusiasts enjoy in the Veloster Turbo, and offers the same six-speed manual gearbox, but the price of admission to the forced-induction Forte Koup is $20,600—that's $1,500 below the starting point of its corporate cousin. As for the upgraded Koup's direct competitor, the 2013 Honda Civic Si Coupe, it's $1,915 more expensive, with pricing still to come for the 2014 model. In fact, with its turbocharged (and direct-injected) engine, the 2014 Kia Fore Koup just may be the least expensive car in the country to serve up more than 200 horses.

Consider the numbers from some of its most likely rivals: 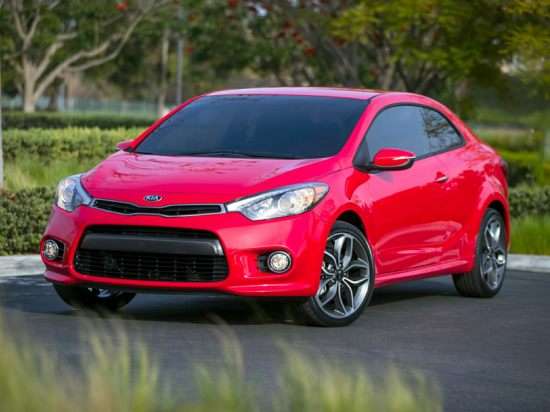