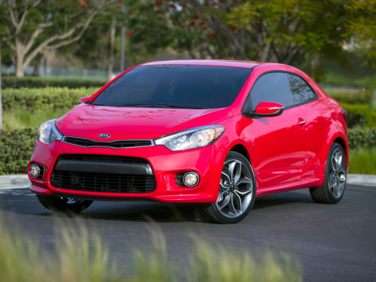 All About Kia Forte Koup

The Kia Forte is a compact budget-focused car that the South Korean auto manufacturer Kia Motors introduced in 2008. The Forte is available in several variations: as a four-door sedan, a five-door hatchback, and a two-door coupe (which is known as the Forte Koup). Availability of the Forte varies around the world, however. The Forte is not available in Europe (except in Russia and Ukraine), due to overlap with other Kia compact vehicles. In the Forte's domestic market of South Korea, it is known as the Kia K3. Australian and South American markets use various other names for the Forte and its variations. The first generation of the Kia Forte borrowed heavily from the Hyundia Elantra, made possible by Hyundai's ownership of the Kia brand. However, Kia sought to design the Forte in such a way to attract younger, more style conscious buyers to the brand.

The Kia Forte Koup made its first appearance as a concept car at the New York International Auto Show in March of 2008. The concept version boasted a 2-liter inline-four engine with a twin-scroll turbocharger. Drivetrain options across the Forte lineup for the United States included a 2-liter engine paired to a five-speed manual transmission or an optional four-speed automatic gearbox. A six-speed automatic was added later.  Or, buyers could opt for a 2.4-liter engine paired to either a six-speed manual transmission or a five-speed automatic transmission. Base model Forte cars came standard with electronic stability control, seat and side airbags, and a four-speaker audio system. The audio system included satellite radio, iPod and USB auxiliary input, and Bluetooth wireless integration. Optional trim packages offered upgrades such as air conditioning, power locks and windows, upgraded audio, keyless entry, alloy wheels, a leather shift knob and steering wheel, and sport cloth seats. Later updates improved the quality of the interior finish. Kia also added a fuel economy package as an option in 2011, which improved fuel consumption thanks to low rolling resistance tires, upgraded electrical system components, and aerodynamic exterior upgrades. The Forte Koup got some more upscale packages than the other Forte models. Forte Koup buyers had the option of a leather interior, a sunroof, and heated front seats. Offerings in Canada were similar, but not identical, through the first generation of the Forte.

The second generation of the Kia Forte is slated for release as a 2014 model year vehicle. Preliminary images showed a more aggressive stance, lower and wider, with LED headlights and taillights. Kia showed the new version in October of 2012 at the Santiago Motor Show in Chile. The updated Forte will have driver-oriented interior revisions and new drivetrain options, and the Forte Koup is no exception. Though the Forte sedan and hatchback versions will be on the market before the Forte Koup is actually released for sale, Kia is counting on the hope that some United States buyers will hold out for the Forte Koup, since that is the car’s primary target market. The second generation Forte Koup was designed at Kia’s North American facility in Irvine, California. Two drivetrains will be available, each based on a different four-cylinder engine. The EX trim level gets a 2-liter direct-injected engine that yields 173 horsepower, and it’s available only with a  six-speed automatic transmission. The Forte Koup SX, though, features a 1.6-liter direct-injected turbo-powered engine that produces 201 horsepower. The SX comes standard with a six-speed manual, although the aforementioned automatic is an available option. The SX also gets bigger brakes to handle the additional power. Interior options and other optional features are more extensive than the previous generation. Keyless start, navigation, and HID headlights have all been added to the options list.