Now the Cadenza isn't Kia's first attempt at a full-size sedan. That honor would befall to the Kia Amanti which was built in the mid to late-2000's. However it wasn't a big seller and the automaker decided to pull it from the marketplace. The Cadenza shows that Kia has learned for its mistakes that it made from the Amanti.

Let's start with the styling. While the Cadenza isn't the most dramatic in design when compared to the likes of the 2014 Chevrolet Impala, Toyota Avalon, or Chrysler 300, the looks should appeal to many. To us, the Kia Cadenza's designs mimics the current-generation BMW 5-Series. This is especially true in the back where the two models have a similar design. Up front, you have Kia's Tiger Mouth grille and set of upswept headlights.

Stepping inside the Cadenza, its a pretty nice to place to be in. There is loads of leather, wood trim, and soft-touch materials throughout. Anyone get comfortable in the Cadenza, whether that's in the front or in the back seat. Being a Kia, the Cadenza comes chock full of equipment as standard such as proximity key, dual-zone climate control, Infinity audio system, eight-inch screen with Kia's next-generation UVO infotainment system, and UVO eServices.

Under the Cadenza's hood is a 3.3L V6 with 293 horsepower and 255 pound-feet of torque. A six-speed automatic transmission with paddle-shifters helps get the power to the front wheels. The EPA rates 2014 Kia Cadenza at 19 City/28 Highway/22 Combined. 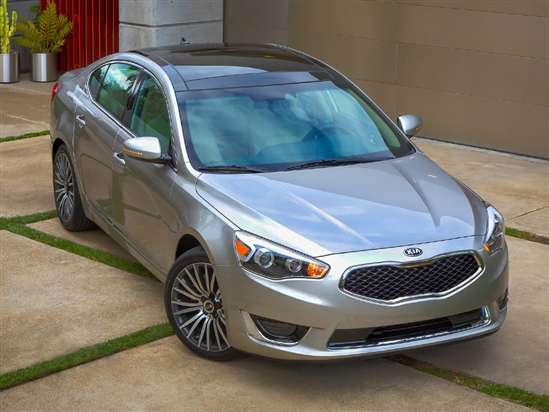