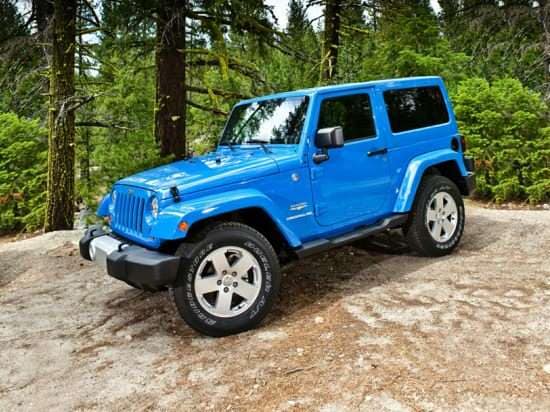 Changes for the 2014 Jeep Wrangler:

Jeep adds three new special-edition versions of the Wrangler for 2014: the Polar Edition, the Dragon Edition, and the Rubicon X. Last year’s Freedom Edition also returns, a new Trail Kit is optional, the Sport model can be fitted with Rubicon wheels and tires, and five new colors debut.

The 2014 Wrangler lineup is a diverse one. First, there are two models from which to choose: Wrangler and Wrangler Unlimited, the latter a 4-door model with a longer wheelbase. Main trim levels include Sport, Sport S, Sahara, and Rubicon. Special edition models include the Freedom Edition, the Polar Edition, the Dragon Edition, and the Rubicon X.

There are two things about the 2014 Wrangler lineup that we want to call out. First, for each Wrangler Freedom Edition that Jeep sells, it donates $250 to the USO in association with the Jeep Operation Safe Return program. Second, the new Wrangler Rubicon X includes a winch-ready steel front bumper with removable end caps, wider rock rails, and a 73.1:1 crawl ratio.

Every 2014 Wrangler is equipped with a 3.6-liter V-6 engine that generates 285 horsepower and 260 lb.-ft. of torque. A 6-speed manual transmission delivers power to all four wheels through a Command-Trac 4-wheel-drive system with a 2-speed transfer case. A 5-speed automatic transmission is optional, and the Wrangler Rubicon is equipped with a Rock-Trac transfer case, Dana 44 front and rear axles, Tru-Lok locking axles, and other upgrades designed to give it maximum off-roading capabilities.

Every version of the Jeep Wrangler is rated to get 18 mpg in combined driving. It doesn’t matter which body style, which transmission, or which 4WD system you choose.

The 2014 Wrangler is not particularly safe, but then, it has a removable top and doors, and lots of ground clearance. The National Highway Traffic Safety Administration (NHTSA) gives the Jeep a 3-star rollover rating, and has not assessed the current Wrangler’s crash protection.

The Insurance Institute for Highway Safety (IIHS) gives the Wrangler a “Good” rating for protection in the moderate overlap frontal-impact test, but things go downhill from there. Rear-impact injury prevention for both versions of the Wrangler is rated “Marginal.” Side-impact protection is “Marginal” for the Wrangler Unlimited and “Poor” for the standard Wrangler.

Additionally, the standard Wrangler rates “Poor” in the new small overlap frontal-impact test, which is designed to measure driver protection in the event the Jeep hits a tree, a utility pole, or oncoming traffic on the front left corner of the vehicle.

Much of the “technology” associated with a Jeep Wrangler pertains to equipment that makes it kick butt off-road. Still, this rugged SUV can be optioned with Bluetooth calling and music streaming, automatic climate control, a touchscreen navigation system, and a premium sound system. There’s even a 3-prong, 115-volt electrical outlet providing juice for any portable technology you might bring along for the journey.