The flexibility of Jeep’s Grand Cherokee is demonstrated in no small measure by the existence of the Jeep Grand Cherokee SRT. For those for whom that initialism is new, the letters S-R-T represents the phrase “Street and Racing Technology”, which is the appellation applied to Chrysler’s high performance automotive division.

SRT was recently spun off into a brand unto itself, though its products are derived from each of the brands within the Chrysler fold. The most illustrious member of the SRT fold is of course the SRT Viper; there is also currently the Chrysler 300 SRT, Dodge Charger SRT, and Dodge Challenger SRT. Each of these models represents the highest performing version of the product line it represents.

The history of the SRT group goes all the way back to the 1950’s when a group of Chrysler engineers got together to extract more power from the company’s engines. They came up with a new intake manifold employing long tube intake runners and called it a Ramcharger. Upon the success of the design, they adopted its name for their group, thus becoming the “Ramchargers”.

Upon the introduction of the Viper in 1989, the group responsible for developing it called themselves Team Viper. Meanwhile another group within Chrysler was busy developing the 1993 Plymouth Prowler. In 1997, both of those groups were combined to form Chrysler’s Performance Vehicle Operations or “PVO”.

PVO’s first splash was placing the Viper’s engine in a pickup truck (from which it was derived in the first place). That model was called the Dodge Ram SRT10, which shared the auto show circuit with the Dodge Neon SRT4 and of course the Viper SRT10. In case you’ve haven’t guessed, the number at the end referred to the cylinder count of the model’s engine.

Chrysler renamed the PVO group SRT in 2004, and in 2006, the group introduced the first Jeep Grand Cherokee SRT model, the Grand Cherokee SRT8. Boasting 420 horsepower from a 6.1-liter V8, the all-wheel drive stormer used a five-speed automatic transmission and was capable of accelerating to 60 in under five seconds. With its lowered ride height, 20-inch wheels, Brembo brakes, and driver selectable ESC settings, the 2006 Jeep Grand Cherokee SRT8 was quite the formidable performer.

Flash forward eight years, the SRT group is now offering another iteration of the Grand Cherokee; this one even more formidable.

Of course, as nice as all of that is, what truly makes the SRT Grand Cherokee is its performance-oriented hardware. This includes a 470-horsepower V8 engine; twenty-inch forged alloy wheels, an adaptive suspension system, a performance-oriented steering system, launch control, and a driver programmable all-wheel drive system.

On the appearance front, the SRT Jeep also gets sport seats upholstered in leather and suede, and carbon fiber interior trim pieces. Pricing for the ultra high performance 2014 Jeep Grand Cherokee SRT starts at $64,380 plus $995 in destination charges.

The SRT Grand Cherokee is recognizable by dint of its custom grille treatment. Featuring the traditional seven-slot Jeep treatment, those slots are shorter on the SRT fascia, trimmed in chrome, and set against a black background. The SRT also gets slimmer headlights accented by a specific LED daytime running light cluster. The headlights are also set against a black background to make them stand out more.

Additionally, gracing the SRT Jeep Grand Cherokee's face is a deep airdam featuring a gaping air intake beneath the bumper. The hood features a more pronounced “power dome” bulge and a pair of rear facing air vents for extracting heat from the engine compartment.

At the rear, the LED taillights get black surrounds, a pair of huge exhaust outlets hint at the performance potential of this very special Jeep, and the tailgate features an integrated spoiler. Speaking of that liftgate, it opens automatically at the touch of a button, and the glass portion is fixed—it no longer opens as it did on past models.

Taking center stage inside the Jeep Grand Cherokee SRT is a multifunction flat-bottomed steering wheel proudly emblazoned with the SRT logo. The three-spoke wheel has buttons on the front and on the back. These control the audio system, telephone, cruise control, and can be used to scroll through the various pages of the seven-inch full color instrument display. The wheel also carries paddles for controlling the manual-shift function of the eight-speed transmission.

Dominating the center console is the Grand Cherokee’s 8.4-inch touchscreen monitor for interfacing with secondary functions, including the navigation system and the SRT performance pages. SRT Performance Pages display recent track times, lateral acceleration, 0-60 mph times, and a wealth of other performance-oriented information. All of the data is shown in full-color and can be transmitted to other SRT drivers using the touchscreen’s built-in 3G connection.

Just beneath the touchscreen is the climate control system, dominated by three large round dials sized so they can be easily operated while the driver or passenger is wearing gloves. Moving down the center stack you’ll run into the brawny T-handled transmission shift lever.

The Jeep’s chiseled sport seats feature abundant bolstering and are upholstered in both leather and strategically placed suede to help them hold occupants in place during the extremely spirited maneuvers of which this Grand Cherokee is so readily capable. Trimmed with contrasting stitching, this treatment is repeated on the dash, center armrest, and door panels.

Soft touch materials are employed wherever a passenger’s body might come into contact with the interior. Adding to the upscale appearance of the interior is genuine carbon fiber trim accents on the doors and instrument panel.

Naturally legroom, headroom and shoulder space are highly abundant. While the Jeep offers a tidy-looking appearance outside, interior space is well taken advantage of. While we wouldn’t exactly label it cavernous, we will say it is more than adequate.

For the 2014 model year, Uconnect Access is a new safety-oriented feature for the Grand Cherokee SRT. Owing to its embedded cellular technology, the enhanced Uconnect system affords the Jeep’s occupants direct communication with local emergency service personnel at the touch of a button. In other words, the system calls 911 rather than a call-in center like competing systems do.

NHTSA’s crash test ratings for the Grand Cherokee vary according to when the specific vehicle was built. If the Jeep was built prior to July 22, 2013, it earned four stars in frontal crash testing and five stars in side impacts. Jeep Grand Cherokees with four-wheel drive built after July 22, 2013 get five stars all around, however the rear-drive models only booked four because of their lower rollover rating. Of course, given all SRT Grand Cherokees are all-wheel drive, this is something of a moot point.

The IIHS awarded the Grand Cherokee its highest rating (“Good”) in frontal-offset, side, and roof-strength crash tests. The seats also earned a “Good” rating for whiplash protection in rear impacts.

Without question, the heart and soul of the 2014 Jeep Grand Cherokee SRT is its 6.4-liter V8. Equipped with Chrysler’s Fuel Saver Technology to improve fuel economy, the SRT V8 delivers 470 horsepower and 465 ft-lbs of torque. Fuel Saver Technology deactivates four of the eight cylinders when the engine is lightly loaded, as in steady state operation on the highway.

Relocating the SRT’s exhaust outlets to the sides of the rear valence, rather than having them exit from the center as on the previous iteration of the high-performance Jeep model enables towing. The 2014 Grand Cherokee SRT boasts a towing capacity of 7,200 pounds.

As we mentioned previously, the Jeep’s engine is paired with a performance oriented all-wheel drive solution and a new eight-speed automatic transmission. The transmission is electronically controlled and features mapping for maximum performance, as well as maximum fuel economy. A button on the center stack allows drivers to engage an Eco Mode for prioritizing fuel economy.

The powertrain also incorporates a launch control function, and the all-wheel drive system can be configured to specifically deliver 70 percent of the engine’s output to the rear wheels. This enables the Jeep to mimic the rear-drive feel performance-oriented drivers covet.

Activating the launch control function and giving the SRT Grand Cherokee a full throttle start is a delightful experience. One you’ll want to repeat over and over and over again. The Jeep launches hard, and the 6.4-liter V8 emits a bellow wholly reminiscent of a NASCAR racer—except more sophisticated. You can hear all of the tuning the SRT team put into refining this engine and it’s utterly glorious.

Beware though, your inner 12-year old will come out before you know it and insist upon driving the Jeep for all its worth. This, most assuredly is an automobile you must drive, you cannot allow it to drive you—all the time. Just pick your spots—carefully.

The good news is along with the explosive acceleration potential of the Jeep, its handling is absolutely first rate. The Grand Cherokee SRT goes more like a large sports sedan than it does an SUV convinced to behave somewhat like a sports sedan. What the SRT people have accomplished with the Grand Cherokee SRT is a wonder to behold. In many ways, they have seemingly suspended the laws of physics—up to a point.

The SRT corners with righteous tenacity and displays remarkable neutrality—right up to its limit. When you do find the limit, understeer is waiting to help rein you back in. The brakes do a more than admirable job of hauling the big Jeep down from absolutely insane speeds time and time again. The accurate steering plays along nicely too, as you set the SRT Grand Cherokee up to enter corners, clip apexes, and go rocketing toward the next cornering opportunity.

Along with that cornering potential does come something of a stiffer ride—particularly with the low profile high performance tires, but it isn’t overly jarring. And honestly, if you understand what the Jeep SRT is really all about, it’s something you can take in stride.

That said, that joy does come with a penalty package.

No matter how many smiles per gallon the SRT Cherokee generates, those estimated 18 miles per gallon combined translate to something more akin to 14 if you let the big V8 do what it was designed to do.

But, if you love to drive and your situation (or your taste) dictates a vehicle of this nature, there really aren’t any other choices with this capability in this price range. To get these numbers with a Porsche badge, you’re looking at twice as much money. And frankly, you can’t get a BMW X5M or an AMG Mercedes M Class in this price range either.

Of course, in the past, this could be justified by the superior fit, finish, and outfitting of those vehicles. But the new Jeep Grand Cherokee’s interior treatment really steps up the SRT Grand’s game in this area as well. All in all, if you’re looking for a high-performance SUV; in our opinion, you’d be hard-pressed to get more for your money in any other vehicle. 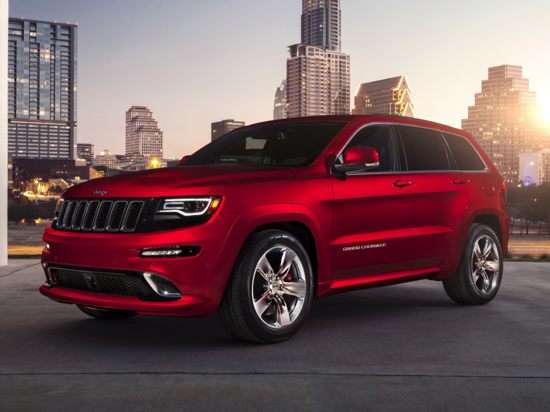