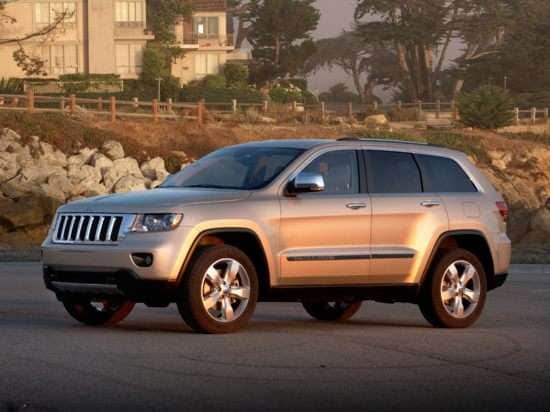 Changes for the 2013 Jeep Grand Cherokee:

Five versions of the 2013 Grand Cherokee are on sale. The Laredo is the least expensive variant, and the new Trailhawk model builds on the Laredo with numerous off-road performance upgrades, plus leather seats and minor styling changes.

Jeep also sells a performance-tuned version of the Grand Cherokee called the SRT8. This model is covered in a separate summary.

Jeep Grand Cherokee buyers choose between a 290-horsepower, 3.6-liter V-6 engine and a 360-horsepower, 5.7-liter V-8 engine, each bolted to a 5-speed automatic transmission and either rear-wheel drive or a selection of 4-wheel-drive systems. Selec-Terrain traction control with five different driving modes is available, as well as a Quadra-Lift air suspension with five settings. The Grand Cherokee’s maximum tow rating is 7,400 pounds.

Depending on the engine and drivetrain selected, the 2013 Grand Cherokee is rated to get between 13 mpg in the city with a V-8 engine and 4WD and 19 mpg on the highway with a V-6 engine and rear-wheel or 4-wheel drive.

In crash tests performed by the National Highway Traffic Safety Administration (NHTSA), the Grand Cherokee earns a 4-star overall rating. Note that the 4-wheel-drive models are more likely to resist rollover, receiving a 4-star rating compared to 3 stars for the rear-drive model.

Additionally, the optional V-8 engine is designed to operate on four of its eight cylinders under certain driving conditions in order to conserve fuel. Available Selec-Terrain technology adjusts drivetrain character depending on the type of surface the Jeep is traversing, while the optional Quadra-Lift air suspension raises the Grand Cherokee for extra clearance and lowers it for better aerodynamics and highway fuel economy.