Introduction
By Thom Blackett
Just last week, former professional baseball player Jose Canseco was testifying in front of Congress about his use of steroids. The drugs made him bigger and stronger, giving him the power to achieve feats he wouldn't have been capable of otherwise. In a way, the engineers at Jeep have been doing the same thing with their Grand Cherokee, injecting it with a little Hemi magic and, like Canseco, the 2006 Jeep Grand Cherokee SRT-8 can do things not previously thought possible in a boulder-bashing SUV. But, unlike Canseco's actions, what Jeep engineers have done is completely legal, meaning you won't have to meet with members of Congress after a test drive.What sets the 2006 Jeep Grand Cherokee SRT-8 apart from other powerful suvs is that Hemi under the hood - in this case, 6.1 liters of V8 muscle. Horsepower and torque ratings are both in excess of 400, 0-60 times are supercar fast, and 60-0 distances are almost unbelievable for a heavy SUV. And on top of it all, it can still tow up to 3,500 lbs. and features full-time four-wheel-drive capability, though there is no low range. This is the first SRT-labeled Jeep, and it's sure to be one we all remember.

Signifying the first time an SRT badge has been worn by a Jeep vehicle, the 2006 Grand Cherokee SRT-8 probably won't be the last if it gets the expected response. On the outside, the SRT-8 version of the Grand Cherokee differs by using five-spoke, 20-inch alloy wheels with 255/45 Goodyears in front and 285/40 Goodyears in back; a massive front air dam and lower body kit; a rear air dam; and the deletion of the roof rack.

This just may be the meanest Jeep you've ever encountered. Based on the Grand Cherokee, the 2006 Jeep Grand Cherokee SRT-8 is the first to wear the Street and Racing Technology (SRT) badge, and benefits from a specially tuned suspension, a retuned four-wheel-drive system, and the same 6.1-liter Hemi engine found in the recently released Chrysler 300C SRT-8 and Dodge Magnum SRT-8. Granted, it promises to quick and agile, but behind it all this Jeep stays true to its trail rated routes.

By bringing the SRT group into the fray, DaimlerChrysler is attempting to take Jeep in a new direction, while still remaining true to the brand's core values - utility and impressive four-wheel-drive capability. The horsepower wars are heating up again and DaimlerChrysler has seen a lot of success with its SRT models and Hemi-powered vehicles. The 2006 Grand Cherokee SRT-8 might help Jeep in sharing some of that spotlight.

The 2006 Jeep Grand Cherokee SRT-8 is due to go on sale this fall and, given the fact that it's a limited production SRT model, chances are you won't be getting your hands on one as easily as you would a regular Grand Cherokee.

How fast it is

How fast it is

Unlike some special edition vehicles that look quick, the 2006 Jeep Grand Cherokee SRT-8 back up its image with solid numbers. This Jeep will do 0-60 in less than five seconds. It'll reach 100 mph and go back to a full stop in less than 19 seconds. That's right - a Jeep from the factory that offers supercar performance. Sweet. Those kinds of numbers are thanks to that 6.1-liter Hemi planted under the hood, with 415 horses running at 6,200 rpm and 410 lb.-ft. of twist doing its magic at 6,400 rpm. Managing that power is a five-speed automatic transmission with the manually interactive Autostick feature. Premium fuel is required.Luckily, it offers impressive braking capability, too. Slowing from 60 mph to 0 mph takes only 125 feet thanks to anti-lock brakes, large discs (360-mm front, 350-mm rear), and Brembo calipers.

Where the 2006 Jeep Grand Cherokee SRT-8 really shines is in its ability to combine the rugged utility people expect from a Jeep with the power and performance expected from an SRT-badged vehicle. The SRT team tuned the full-time four-wheel-drive system and the suspension to maximize handling with off-road ability, and even though this portly bugger tips the scales at almost 4,800 lbs., that weight is distributed to very respectable 55 percent up front and 45 percent in the rear. And to top it off, the 2006 Jeep Grand Cherokee SRT-8 carries five adults and their gear while towing up to 3,500 lbs.

What do we think? Let's see - it's bursting with power, it can carry all of your friends and tow your weekend toys down the highway or off the beaten path, and it's got a sweet looking body kit and some nice chrome rolling in the wheel wells. And, yeah, it's got a Hemi. Let's just say we like it, and we're confident a lot of you will, too. The 2006 Jeep Grand Cherokee SRT-8 will put the fun back into going to the grocery store, taking the kids to school, commuting to the office, or towing a trailer full of yard waste to the dump. 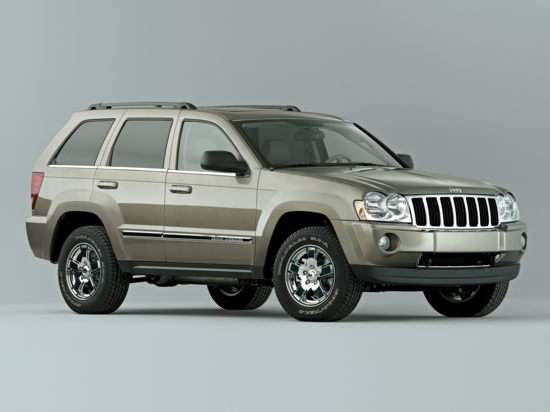