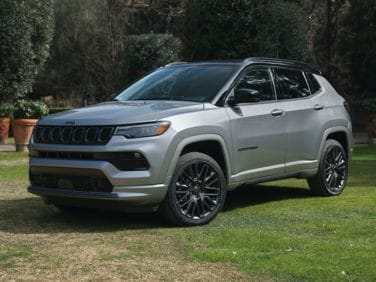 All About Jeep Compass

The Jeep Compass is a four-door, five-passenger compact SUV. The Jeep Compass is manufactured in Belvidere, Ill. alongside the Jeep Patriot and Dodge Caliber. Jeep introduced the Compass in 2007 as an affordable, entry-level SUV to attract new customers to Jeep showrooms. Top competing vehicle models in the compact SUV class include the Toyota RAV4 and Honda CR-V.

The Jeep Compass was introduced into the Jeep lineup in an effort to satisfy growing consumer interest in smaller, more fuel-efficient SUVs and crossover vehicles. To meet this need, Jeep compromised much of the ruggedness and performance that most consumers have come to expect from the brand. As such, the Jeep Compass is much more car-like in appearance than the traditional Jeep SUV. While angular flares over the wheels and rounded corners may be new additions to a Jeep vehicle, the circular headlights and classic 7-slotted Jeep grille make it identifiable as a Jeep automobile.

The Jeep Compass was built around the Chrysler MK platform that is found on the Jeep Patriot and Dodge Caliber. The vehicle sports a 2-door design and 2-rows of seats that accommodate up to five passengers. Though designed with value in mind, the interior of the Compass features chrome accents, a 2-tone color design and a contemporary ambiance.

The Jeep Compass is currently the only Jeep vehicle that is not Trail Rated. This indicates that the vehicle is not intended for off-road use and does not deliver the same level of traction, maneuverability and ground clearance found in other Jeep vehicles.

The compact SUV is available in two trim levels – Sport and Limited. Both trims feature a 2.4-liter 4-cylinder engine that delivers an output of 172 horsepower and 165 lb-ft. of torque. Many critics have complained that this is not enough power to properly propel the 3,400-lb. Compass. A 5-speed automatic transmission and front-wheel drive are also standard. An optional Freedom Drive I 4-wheel drive system is available, as well as a continuously variable transmission (CVT).

Since the introduction of the Jeep Compass in 2007, the vehicle has displayed strong sales figures and a relatively positive response from consumers. While declining sales have hounded larger Jeep SUV models, Jeep's smaller, more fuel-efficient vehicles have flourished in the face of rising gas prices. In 2006, Chrysler Vice President of Sales and Field Operations, Steven Landry, stated that "strong customer demand for the Dodge Caliber and the Jeep Compass has set the standard for [their] other vehicle launches." The 2009 Jeep Compass is a carryover from 2008. The 2009 Compass comes in two different trim levels. Each can be ordered with four-wheel drive, and both the Sport and the Limited come with a 2.4 liter, 4-cylinder engine that generates 172 horsepower and 165 lb-ft of torque. This engine is matched with a 5-speed manual transmission as standard equipment, but a continuously-variable automatic featuring Autostick manual control over shifting is available as an option on all versions of the Compass. With the manual transmission, fuel mileage for this motor is rated at an impressive 23 miles per gallon in the city and 28 miles per gallon on the highway. A 141 horsepower, 2.0 liter 4-cylinder engine with similar fuel economy and a continuously-variable automatic transmission is also an option in the two-wheel drive version of the Compass Sport.