Jaguar replaced the retro-themed S-Type with the 2009 XF, which kicked off the iconic luxury brand’s continuing transformation from a purveyor of a leather-wrapped and veneer-paneled past into a builder of modern, performance-oriented machines. From its bold grille and clean bodywork to its contemporary interior complete with rotating air vents and a transmission gear knob rising from the center console like a Phoenix from the ashes, the XF is responsible for keeping Jaguar alive.

One of those new engines is a turbocharged 2.0-liter 4-cylinder engine, which is now standard in the entry-level version of the XF. While the automaker also offers a range of supercharged V-6 and V-8 engines in this, the least expensive Jaguar model, I wanted to find out if a tiny turbocharged 4-cylinder could be satisfying in a car of this size wearing a price tag of $47,850.

As it turns out, the answer is yes.

What I never liked about the 2009-2011 Jaguar XF were its headlights. The car always looked surprised or startled. Now that the headlights are slimmer and reshaped, and include emerging signature J-blade LED running lights, in combination with a tidier tail, I like the XF’s appearance much better. Plus, thanks to a wide range of paint colors and wheel designs, it is easy to find an appealing version of this car.

Inside, the XF delivers just the right amount of traditional materials rendered in modern, symmetrical design. Clean and contemporary, the XF’s cabin emphasizes form over function in many respects, but owners are certain to acclimate to certain quirks. What I found odd about my test car’s interior design was the plain Meridian audio component housing in the center of the dashboard. This piece looks unfinished, like a mold that might be used to create something more visually appealing, and its lack of luster stands out in an otherwise flashy cabin.

With a 16-way power driver’s seat, it’s nearly impossible to complain about comfort levels, and the Jaguar XF’s upgraded chair delivers in terms of support even if the seat feels hard. During a warm spring testing day, however, I found that the bottom cushion’s optional ventilation system takes its time drawing heat from the seat, and that it takes awhile for the automatic climate control system to rid the cabin of unwanted warmth.

The rear seat is comfortable…enough. Thigh support is generous and Jaguar protects passengers’ expensive shoes from the hardware tucked under the front seats by installing carpeted panels, but my shins were in contact with the hard plastic front seat backs and the rear seat’s slightly reclined position forced me to slouch. I don’t have any trouble doing that on my own, and didn’t appreciate the help.

In terms of quality, the Jaguar displays a mix of premium materials in obvious places, such as the gorgeous wood and the genuine aluminum, and cheap plastic in less apparent locations, such as the housing around the steering column and the handle used to close the trunk. XF owners are going to need sunglasses, because all that silver cabin trim generates a ton of glare. And though my test car had upgraded “soft-grain” leather rather than the standard “bond-grain” hides, it still looked and felt too inexpensive for a car wearing a price tag this high.

In many respects, and perhaps appropriately so, the XF exhibits style over substance. The rotating air vents that swivel into place when the driver pushes the start button and the transmission selector knob that rises from the center console are stylistic affectations that move slowly and gracefully into place, suggesting that the driver should plan to have patience with this automobile. Shifting into and between gears takes time, and at the end of a journey, the owner must depress the ignition button for more than a moment to shut the engine down. In a rush? The Jaguar XF might cause frustration.

This is certainly true when it comes to using the Jag’s infotainment system. Though the automaker continually upgrades and updates its technology, either the 7-inch touchscreen or the hard-drive behind it remains slow to respond to inputs. Impatient people, such as myself, will then stab at the screen having assumed that the system has failed to recognize a command, and that often puts the user down the wrong technological path. Calmly approach the screen and its menus, apply patience to the task at hand, and success is yours.

In addition to the options included on my test car, upgrades for the 2013 XF include a Cold Weather Pack ($700 – heated steering wheel, heated windshield) and a Portfolio Sport Pack ($8,575 to $10,150 – Portfolio Pack plus upgraded wheels and tires, sport seats, perforated leather, Piano Black veneers, and aerodynamic enhancements for the car’s exterior). Dealers can also install a number of upgrades to further personalize a Jaguar XF.

If you’re trying to determine how the Jaguar XF might protect you in a collision, don’t bother checking in with the National Highway Traffic Safety Administration (NHTSA) or the Insurance Institute for Highway Safety (IIHS), because they haven’t performed crash tests on this model.

Instead, you’ll need to consult the standard and optional equipment list, where you’ll find that six airbags are included in the base price, along with “soft landing” front seat belts, anti-whiplash headrest designs, and sophisticated traction, stability, and braking systems. Spend more, and the XF can be equipped with a reversing camera, a Blind Spot Monitor, Adaptive Cruise Control, and Intelligent High Beam headlights.

Because I’m usually driving mainstream makes and models that sell in large volumes, this XF provided my first experience using automatic high-beam headlight technology. I’m flat-out sold on this as a safety feature.

During a 15-minute ride home from a relative’s house using dark back roads with few streetlights, the Jaguar’s bi-Xenon, adaptive, Intelligent High Beam headlights proved spectacular. They unfailingly shut themselves off when cars approached on the opposite side of the road, and when the XF approached other cars from behind. The rest of the time, they lit the road ahead like a midnight sun. The only downside was that forward illumination with the low beams was like suffering temporary blindness, making me feel as though I was overdriving the headlights despite a modest 50-mph pace.

The key metric here is torque. Notice how it peaks across a third of the engine’s rev range, and is available to the driver right when he or she punches the gas to pass or accelerate out of a corner? As a result, the XF feels quicker than it is, though the driver will experience turbo lag when accelerating from a stop. Also, once the torque output starts to decline beyond 4,000 rpm, the XF feels less responsive, and isn’t particularly satisfying to rev hard. If you’re looking for a luxury sports sedan that pulls relentlessly to redline in every gear, this isn’t your engine. Instead, try the XF’s optional supercharged V-6 or V-8.

The main reason Jag replaced the previously standard 5.0-liter V-8 with a new turbocharged 4-cylinder engine is to improve fuel economy. To that end, the XF is EPA-rated to return 19 mpg in the city, 30 mpg on the highway, and 23 mpg in combined driving, increases of 3 mpg, 7 mpg, and 4 mpg, respectively. I averaged 21.6 mpg during my week behind the wheel, but keep in mind that I dipped regularly and liberally into the turbo-four’s well of torque.

In addition to providing decent fuel economy, the XF’s new turbocharged 4-cylinder engine is quite refined. It seems that way from the driver’s seat, anyway, because Jaguar has done an outstanding job of isolating occupants from the outside world. This car is almost utterly silent inside, enough so that minor wind noise from around the windshield pillars and emanating from the sunroof seal was perceptible. Of course, all one must do to vanquish these faint whooshes is to crank up the impressive Meridian audio system.

Oftentimes, the XF feels its age. Structural creaks are occasionally evident when tossing the sedan down a twisty mountain road, and both around town and on the freeway the suspension tuning makes the car feel as though it is riding on overinflated tires. Jaguar’s trademark slow and syrupy steering is in clear evidence, but the waftability so often ascribed to the automaker’s products is absent. In my opinion, the company’s engineers quickened and tightened the steering, softened the suspension a bit, and eradicated the occasionally abrupt weight transitions displayed by my test vehicle.

In any case, the XF rarely embarrasses itself, and covers ground with grace and dignity. The brakes are strong and faithful, the turbocharged 4-cylinder engine delivers delightful mid-range response, and even in a place like Southern California, where you can’t go anywhere without seeing a not-yet-registered BMW 5 Series or Mercedes-Benz E-Class tooling down the road in an adjacent lane, the XF is a unique and distinctive choice.

If you love the way the Jaguar XF looks, there’s no reason to kick it off your consideration list over the way it performs. Dynamically, the XF is not the best car in its class, but it is a Jag, and for many luxury sedan buyers with a soft spot for classic British motoring, that counts for plenty, even if the XF was the catalyst for the brand’s forward-thinking shift away from tradition.

Jaguar provided the 2013 Jaguar XF for this review 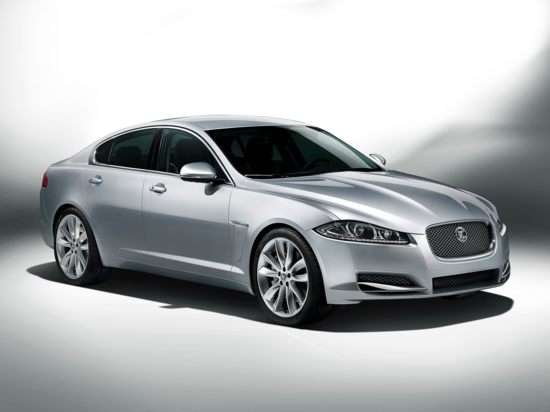